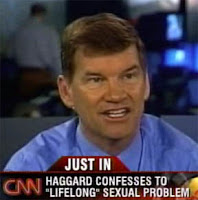 Ted Haggard and his wife and his oldest son are on Larry King Live as I type this post and my first reaction is "Get me the vomit bag!" First, Haggard has refused to assure viewers that there are no other men with whom he had relations other than Mike Jones and Grant, the young New Life Church volunteer. I suspect that this refusal means one thing: that we can expect more revelations from other men in the future.
*
Second, and most disgusting of all is Haggard's claim that he is "heterosexual with issues" according to his "therapist." Of course, I suspect that his therapist is someone who is an affiliate or protege of NARTH and Exodus International - which means a witch doctor would have the same legitimacy. I was married for 24 years and fathered three children, so I do know how strong the urge is to deny the reality of one's true sexual orientation. But give me a break!! Haggard has had at least two gay affairs that lasted for some time - it wasn't a case of one or even two unplanned slips on Haggard's part.
*
Either (1) Haggard is delusional or (2) he and his wife are playing the situation in order to somehow turn it into a money making proposition through book deals or some other ploy. Perhaps it's a case of a little of both. All I can say is that I do NOT buy Haggard's story and I suspect that LEGITIMATE therapists are rolling their eyes at the incredible bull shit that Larry King is allowing to be swilled unchallenged. In my opinion, the truth is that Haggard is gay and he is most sexually/emotionally fulfilled by gay sex. He needs to stop fooling himself, his wife, his children, and stop lying to the rest of the world.
Posted by Michael-in-Norfolk at Thursday, January 29, 2009

As I noted on my blog thingy, unless I'm wrong or people are just sick and tired and letting it go, there will be comments calling out Larry King for asking Haggard what he would do if a gay person approached his sons, a question akin to gays equals predators.

As a christian minister who is gay and come out of a staunch SBC background. I know its hardto deal with, however one thing I never did was propigate hatred toward any group. That is not Christ. However from what I remeber Haggard did just that following the party line. Second being "hetero with gay issues" sound like he is bisexual. But i doubt he would ever admit to it, unless of course he is gay not bi and just got to point like me and could not ignore it anymore. One is at heart how they live.

I am very impressed with Ted Haggart's honesty. I feel for him because his religion won't allow him to be gay. I am heterosexual and if I was told that I had to be homosexual to satisfy my religion, I couldn't do it, because of my natural predilection. Sexual preference is biological, not psychological and is set from early childhood, if not birth. We are hard-wired that way. I wish him and his family well and hope that he eventually finds his way.