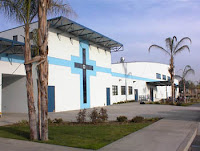 One of the things I did after coming out was to leave the corrupt, hypocrisy filled, and 13th century minded Roman Catholic Church. After first joining the Episcopal Church I ended up joining a parish in the Evangelical Lutheran Church in America ("ELCA") which, while not perfect is light years and centuries ahead of the Catholic Church now run by God's Rottweiler who is most definitely locked in a 13th century level of scientific knowledge. There are other variants of the Lutheran Church which have a Neanderthal mentality including the Wisconsin Evangelical Lutheran Synod ("WELS") which operates California Lutheran High School which expelled two 16-year-old girls for having "a bond of intimacy" that was "characteristic of a lesbian relationship." The hypocrisy of California Lutheran is extreme in its treatment of these girls. The school describes part of its mission to be: "to deal with each student as a redeemed child of God, offering counseling, encouragement, and loving Christian discipline." Well unless the student is perceived to possibly be gay or lesbian in which case the treatment they receive will be akin to that of the Pharisees toward lepers. Here are some highlights from the Los Angeles Times about this travesty:
*
An appeals panel finds California Lutheran High School in Riverside County is not a business and therefore doesn't have to comply with a state law barring discrimination based on sexual orientation.
*
After a Lutheran school expelled two 16-year-old girls for having "a bond of intimacy" that was "characteristic of a lesbian relationship," the girls sued, contending the school had violated a state anti-discrimination law.In response to that suit, an appeals court decided this week that the private religious school was not a business and therefore did not have to comply with a state law that prohibits businesses from discriminating. A lawyer for the girls said Tuesday that he would ask the California Supreme Court to overturn the unanimous ruling by a three-judge panel of the 4th District Court of Appeal.
*
The girls were expelled in their junior year for "conducting themselves in a manner consistent with being lesbians," said [John] McKay [counsel for the school], who added that the girls never disclosed their sexual orientation during the litigation.
*
The dispute started when a student at the school told a teacher in 2005 that one of the girls had said she loved the other. The student advised the teacher to look at the girls' MySpace pages. One of the girls was identified as bisexual on her MySpace page, the other's page said she was "not sure" of her sexual orientation.McKay said the website also contained a photograph of the girls hugging.
*
The school also did not break the law when it disclosed the girls' "suspected sexual orientation" to their parents, the court said. The parents, "in light of their right to control their children's upbringing and education, had a right to know why" they were being expelled, the court said.Hanson said the entire episode was "very traumatic" and "humiliating" for the girls.
*
The school is affiliated with synods that believe homosexuality is a sin, the court said. The school's "Christian conduct" code said students could be expelled for engaging in immoral or scandalous contact, on or off campus.
Posted by Michael-in-Norfolk at Thursday, January 29, 2009