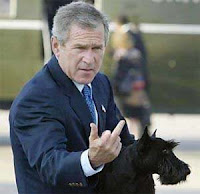 I bookmarked this New York Times article a few day ago, but wanted to come back to it since the harping and whining it describes illustrates all too fully the fact that many in the GOP still do not (or will not) grasp that the Chimperator's regime was a disaster. In his inaugural address, Obama rightly discredited and rejected the many failed policies and subjugation of the U.S. Constitution which took root under the regime of the Chimperator and Emperor Palpatine Cheney. Nothing less than an immediate repudiation on day one of his administration would have been appropriate for Obama. Until the rank and file in the GOP base come to terms with the sad reality that was the Bush/Cheney regime, I do not see the GOP regaining credibility with the majority of Americans. Here are some highlights of the whining and sour grapes heard on the plane back to Texas:
*
On the plane, no longer Air Force One but now Special Air Mission 28000, they talked about the speech. George W. Bush, the former president, was heading home to Texas with his inner circle, having just left the Capitol, where his successor first thanked him for his service and then proceeded to discredit it.
*
The Bush team had worked assiduously to make the transition smooth for the incoming President Obama and stayed out of the way as he used the postelection period to take leadership of the economy even before being sworn in. And now, as far as some of them were concerned, the new president had used his inaugural lectern to give the back of the hand to a predecessor who had been nothing but gracious to him.
*
“On both style and substance,” said Rahm Emanuel, the new White House chief of staff, the new president is “turning the page.” Mr. Emanuel mocked Bush advisers for bristling at the message of the Inaugural Address. “If they didn’t know that was the judgment of people, then their subscription to the newspapers were canceled over the last three years,” he said.
*
Mr. Obama never directly mentioned Mr. Bush’s name after the ritual thank you at the beginning of his speech, but the context of some of his remarks was lost on no one. He criticized “our collective failure to make hard choices and prepare the nation for a new age.” He promised to “restore science to its rightful place.” He rejected “as false the choice between our safety and our ideals.” He assured the rest of the world “that we are ready to lead once more.”
*
Some analysts said it was the first time since Franklin D. Roosevelt took over from Herbert Hoover in 1933 that an incoming president used his Inaugural Address to so evidently repudiate his predecessor as he headed for the door.
*
Ms. Hughes said they took offense at suggestions that Mr. Bush had avoided hard decisions and had not helped people around the world, noting increases in foreign aid and his campaign to fight AIDS in Africa. “That statement, I felt, was fundamentally unfair and dishonest,” Ms. Hughes said.
*
The shots signal a sustained debate in coming months between Bush and Obama partisans over the former president’s record. Mr. Bush says he will let his successor govern without criticism. His defenders took no such pledge. They understand victors write history, but they are determined to try to help shape that narrative themselves.
Posted by Michael-in-Norfolk at Sunday, January 25, 2009