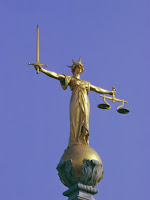 Like many other LGBT bloggers, from time to time I receive some pretty nasty e-mails and/or comments (the latter do not get posted) such as one from someone of apparent Muslim extraction who attacked me for the Auschwitz photos I posted the other day before then laying into me for being gay and telling me all about how homosexuality is a sin.
*
Yet another writer derided me for the "Michael Freedom Fund" and could not believe an attorney might be in financial distress. Thus, I want to set the record straight as to just what can happen in the Virginia Courts to a gay man who comes out in mid-life after being married. Not only was I basically put on trial for being gay, but I was crucified for it as well. After one horrific day in court, I was so devastated and traumatized that I went home and took a very large quantity of sleeping pills and anti-depressant medication. But for my former partner finding me and getting me to the ER, I would not be here today.
*
None of this meant a wit to the judge in my case who in my opinion is a extreme far right homophobe. After my attorney bailed on me - God forbid he play hardball against a judge before whom he might have to appear in the future - I lost more or less everything to the ex-wife, including 100% of my retirement, and was left saddled owing her tens of thousands of dollars that I did not have (and still do not have). I was forced into Chapter 7 bankruptcy and got to keep my house (which is hardly in the best part of town) and my law practice only because they had no equity in them.
*
As for my earning ability, since I am principally a real estate attorney and because due to the economic melt down our residential closing work volume is down 75-80% from where it was even in late 2006, one needs only to do the math to figure out that things are not in a good place financially. Yes, I do other things besides residential real estate and I basically market myself 24/7, but residential real estate is what covered the bills and the rest was the profit margin. Many overhead costs are fixed and not easily reduced short of closing the law firm and starting over all over again from scratch - without any start up capital. I have sublet part of my office space and reduced staff, but it remains a struggle. I even rented out part of my home, but just lost that tenant because he lost his job due to the economy. Anyone need a room?
*
On the upside, I live my life out and proud and I am one of only two attorneys in this area of 1.6 million people that are brave enough - or crazy enough depending on one's perspective - to not stay in the closet professionally. I hope through this blog and by living openly and honestly I can help other LGBT individuals and maybe be to some small extent a role model for younger LGBT professionals. And yes, there are days when getting up, holding my head up and going on takes a great deal of effort. Oh, and as an added precaution, I don't keep sleeping pills around anymore.
Posted by Michael-in-Norfolk at Friday, January 30, 2009

Take it from a Internet forum geek like me: you'll find plenty of ignorance on the web. :P

It doesn't matter what career you have...in this economy, you're going to have some problems. I'm sure even doctors are having some problems paying the bills.

As for what the Muslim guy said, I'm sure you've learned to shrug off insults like that.

But now I see why you started up the Michael Freedom Fund. You said you were in a rut, but I didn't know it was that bad. I know everyone's having a hard time with it, but you situation in particular seems terrible. I'm very sorry for your losses.

But stay strong! You're very brave, fighting against all these odds, and I know you can see it through. Just don't give in!

If things go well for me, you might see another donation from West Pittsburg. :)

I can imagine just how many bigotted individuals actively search out blogs like yours.
Sorry to hear you're going through this crisis but just keep "the light at the end of the tunnel" in focus.
You'll be okay. Keep your head up and don't let others get you down. It's YOUR life. Live it for yourself!