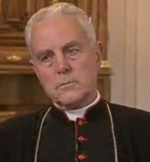 On Saturday I posted about Pope Benedict XVI un-excommunication of one of Archbishop Marcel Lefebvre’s far right appointees, Briton Richard Williamson (pictured at left), who is denies that the Holocaust occurred and/or that there were no Nazi gas chambers and that at worse only 300,000 Jews perished. It now turns out that those views are only a few of Bishop Williamson's views that ought to be beyond the pale for any truly Christian Pope. Jim Burroway at Box Turtle Bulletin has even more shocking information on this man whom has now apparently been embraced by former Hitler Youth, Benedict XVI. This event, plus many, many more previously recounted in prior posts on this blog beg the question of why ANYONE gives credence, deference or respect to Benedict XVI and his unholy minions at the Vatican. Here are some highlights from Jim's story:
*
With Pope Benedict XVI saying such outrageous things as describing same-sex marriage as an “obstacle on the road to peace,” or opposing the decriminalization of homosexuality worldwide — including in countries that carry the death penalty even though the Vatican is itself opposed to the death penalty — it’s hard to imagine him surprising us much. And yet, he manages not merely to surprise, but astonish:
*
The Pope has lifted the excommunication from the Roman Catholic Church of four bishops appointed by a breakaway archbishop more than 20 years ago. One of Archbishop Marcel Lefebvre’s appointees, Briton Richard Williamson, outraged Jews by saying the Nazi gas chambers did not exist.
*
It turns out that Williamson is a fan of a lot of remarkable anti-Semitic conspiracy theories. In a September 2002 newsletter, Williamson charges that “Judeo-Masonry is known to have been envisaging three World Wars to achieve its unified global domination. . .
*
Williamson’s newsletters are a treasure-trove of paranoia, nutty conspiracies and general all-around lunacy. Williamson argues that women should not wear trousers and that “almost no girl should go to any university” because doing so contributes to the “the unwomaning of woman.” He blames modernism for causing the Rwandan massacre, he describes pluralism as the major threat to the Faith and salvation of Catholics today, and he decries religious liberty as a substitute religion. He has even criticized the movie The Sound of Music because of how it portrays those “nasty Nazis” and elevates “self-centered” romantic love. His views on gay people, engaging in a sin “crying to Heaven for vengeance,” are all too predictable:
*
In fact the sin [of homosexuality] is so unnatural that Mother Church ranks it alongside murder, defrauding the worker of his just wage, and oppression of the widow or orphan, as one of the four sins "crying to Heaven for vengeance". However, God did not wait for the founding of the Catholic Church to instill in men the horror of this sin, but he implanted in the human nature of all of us, unless or until we corrupt it, an instinct of violent repugnance for this particular sin, comparable to our instinctive repugnance for other misuses of our human frame, such as coprophagy.
*
Take a good look at Bishop Williamson and come to terms with just how horrible and nasty Catholicism is becoming under the Nazi Pope. Oh, and by the way, Benedict XVI nonetheless has the insufferable gall to criticize Barack Obama:
*
ROME (AFP) - A senior Vatican official on Saturday attacked US President Barack Obama for "arrogance" for overturning a ban on state funding for family-planning groups that carry out or facilitate abortions overseas.
Posted by Michael-in-Norfolk at Monday, January 26, 2009