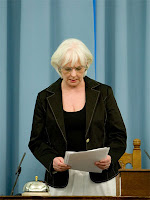 If things proceed as it appears they will, Iceland is about to install the first openly lesbian prime minister in the world's history. Imagine the angst among the homo-hating set such as Pat Robertson, James Dobson and Pope Benedict XVI (yes, I put them all in the same whacked out category) who will likely believe the world is ending because a lesbian is apparently the most popular politician in Iceland. Here are some highlights from Iceland Review:
*
The current Minister for Social Affairs, Jóhanna Sigurdardóttir of the Social Democrats, said she is prepared to assume the position of prime minister as long as she senses that her position is backed by sufficient trust.
*
According to an opinion poll undertaken by Capacent Gallup in December 2008, Jóhanna Sigurdardóttir is the most popular minister—73 percent of respondents said they were satisfied with her work. Sigurdardóttir is also the only minister whose popularity had increased compared to a similar poll undertaken in December 2007.
*
If Sigurdardóttir does become prime minister, she will be the first woman to serve as prime minister in the country’s history and also the first openly gay prime minister in the world.
Posted by Michael-in-Norfolk at Wednesday, January 28, 2009