Who's The Hottest Freshman Congressman? 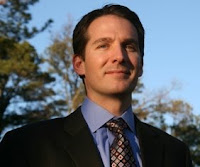 On a humorous/fun note, I noticed that on Huffington Post there is a poll on who is the hottest new freshman member of Congress. Among the top five (5) that one can vote for is Glenn Nye of this area who is pictured above. I've met Glenn in person several times and yes, he is cute. Better yet, he is gay friendly and unlike his predecessor, Thelma Drake, seems open to listening to and likely supporting gay rights issues. Among the other choices are Aaron Shock from Illinois, Jim Himes of Connecticut, Tom Perriello also from Virginia and who like Glenn defeated an anti-gay voting incumbent, and lastly Jared Polis the out gay Congressman from Colorado. Here's some highlights from Huff Po:
*
When members of the 111th Congress convened on January 6th, there were 65 fresh faces among them. Naturally, we've spent the last few weeks familiarizing ourselves with them, and after much voting, debating, and in-fighting -- or not -- we've made our picks for the five most adorable representatives. Take a look and cast your vote below. Then let us know if we left anyone out. Whatever the outcome, just remember: they're all winners here.
Posted by Michael-in-Norfolk at Saturday, January 31, 2009