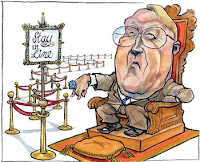 There is a great column by Wayne Besen on 365gay.com that looks at the disingenuousness of Focus on the Family, American Family Association, and similar groups that whine incessantly about "protecting the family" and "protecting the sanctity of marriage" yet are absolutely missing in action when it comes to doing anything concrete to support families and/or marriage except for conducting an anti-gay jihad. In short, they do NOTHING in terms of family friendly legislation that would help families in financial stress, facing crushing medical bills, or on the verge of losing their homes to foreclosure. That's right, absolutely NOTHING. And as for the anti-gay jihad, the whines and shrieks are ALWAYS accompanied by requests for MONEY so that millions upon millions of dollars can be used to denigrate and work to marginalize gays and, of course, pay the salaries of the "ex-gays for pay" and demagogues like Don Wildmon and Daddy Dobson. In short, these organizations are frauds that but for hiding behind the cloak of religious ministries might well be shut down by under anti-fraud laws. The truth about these fraudulent groups needs to be disseminated as widely as possible on a constant basis. Here are some highlight's from Wayne's column:
*
The last few weeks have shown that so-called pro-family organizations are some of the most useless, money-sucking scams in the world. With real families suffering from economic hardship in America, a declining birthrate in Europe and Google doubling the price of daycare for employees, the only thing right wing family groups want to discuss is their bizarre and all-encompassing fagela fetish.
*
Recently, The Brooklyn Paper, had a huge headline, “SPLITSVILLE: Brooklyn divorces up 30 percent.” The article cited a number of reasons including, “when the economy tanks, so do many marriages.” One would think this would alarm so-called pro-family organizations and they would be out in force repairing marriages – or at least looking for economic solutions to take the stress off couples.
*
A new study by the Center for Labor Market Studies at Northeastern University showed that in 2006, for the first time in U.S. history, a majority of births to women under 30 – 50.4 percent – were out of wedlock. New York Times columnist Bob Herbert points out that, “By comparison, when John F. Kennedy was elected president in 1960, just 6 percent of all births were to unmarried women under 30. One imagines that this report might have startled “pro-family” organizations and they would have put their millions of dollars towards stopping this trend. No such luck. Instead, they are investing huge piles of money and manpower to pass anti-gay marriage amendments in Florida, Arizona and California.
*
Right wing organizations can be considered many things – but certainly not advocates for the family. They inhale money, exhale anti-gay pollution and have done absolutely nothing for the traditional families they claim to represent. It seems the more such groups proliferate, the more the family deteriorates.
Posted by Michael-in-Norfolk at Thursday, July 10, 2008