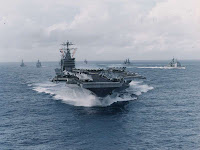 Actually, I tried to call in on a "town hall" meeting that John McCain was having yesterday for the purpose of asking him to justify his support of DADT in light of the new study released this past week. Unfortunately, I never got to ask my question and unless and until I hear McCain give a rational, cogent reason, I will assume he supports DADT because Daddy Dobson and other Christianist bigots are demanding that he do so. Living in the area that is home to the largest naval base in the world and many other military installations, it is easy to see the idiocy of DADT on a daily basis in terms of competent, patriotic military personnel who are expelled and the Gestapo atmosphere the policy engenders on the part of some gay haters. Here are highlights of why the Washington Post believes it is time for this idiotic policy to be ended:
*
THE "DON'T ASK, don't tell" policy that continues the ban on gay men and lesbians serving openly in the U.S. military was wrong when President Clinton signed it into law in 1993, and it's wrong today. The only difference between then and now is that more people are now coming around to that conclusion.
*
The latest entrants -- four retired officers, each representing a branch of the military -- made their views known in the "Report of the General/Flag Officers' Study Group" released this week by the Michael D. Palm Center of the University of California at Santa Barbara. . . . Their findings reveal the devastating impact of this wrongheaded policy.
*
Currently, 24 countries allow gay men and lesbians to serve openly in the military. The study group highlighted the experience of Israel and Britain, which is actively recruiting gay men, lesbians and bisexuals to serve in the Royal Navy. The group's No. 1 recommendation is that Congress repeal the ban.
*
And just last month, former Senate Armed Services Committee chairman Sam Nunn (D-Ga.), who led hearings that resulted in the disastrous plan that continues to run gay men and lesbians out of the armed forces (at least 627 in 2007; about 12,500 since 1993), said that the law should be reexamined. That reexamination should be the beginning of the end of "don't ask, don't tell."
Posted by Michael-in-Norfolk at Friday, July 11, 2008