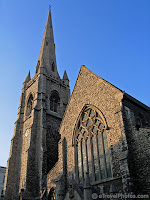 at least the Episcopal Church USA has a female presiding bishop, in fact one of the finalist for the position of bishop in the local VA is a female.