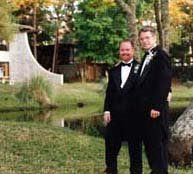 While much of the hysteria on the part of the Christianists over the November vote on the California gay marriage ban is likely motivated by their desire to wring every possible dollar out of the pockets of their sheep like followers, there is some truth to the claim that if they lose in California, it will constitute a huge blow to their cause. Plus, it will potentially deprive them of one of their leading ploys to get money out of the weak minded and uninformed. They have beaten abortion to death and anti-gay jihads have done much to refill their money coffers. The bleating of the ever dishonest and disingenuous Don Wildmon of the American Family [Fanatics] Association is symptomatic of their worries that the anti-gay cash cow might die or be mortally wounded after November 4th if California voters reject the Christianist bid to amend the California constitution. Needless to say, few things would make me happier than to see them defeated and wailing and gnashing their teeth. Don Wildmon who is quoted in the article has made a lucrative career for himself sucking from the teet of the anti-gay industry. Here are some highlights from a story from a Christianist news site bemoaning their possible defeat in November:
*
The Arlington Group, a coalition of about 60 pro-family groups and ministries, will stress the importance of the November 4 vote in California on Proposition 8, a proposed constitutional amendment that would protect traditional marriage. To do that, pastors will be encouraged to use one Sunday in September to focus on the sanctity of marriage. Churches also will be encouraged to take up a special offering which will go toward the fight for marriage in California.
*
Dr. Donald Wildmon is founder of the American Family Association and an organizer of the Arlington Group. He says passage of the California marriage amendment is critical. "If we lose California, if they defeat the marriage amendment, I'm afraid that the culture war is over and Christians have lost," says Wildmon, a 30-year veteran of the culture war. "I've never said that publicly until now -- but that's just the reality of the fact. "If the homosexuals are able to defeat the marriage amendment defining marriage as between a man and a woman, then the culture war is over and we've lost -- and gradually, secularism will replace Christianity as the foundation of our society," he adds.
*
The vote in California, Wildmon explains, will affect the entire nation. "California is a big dam, holding back the flood -- and if you take down the dam in California, it's going to flood 49 other states," he illustrates. "It will destroy marriage as it has been known for thousands of years, and with that the cultural decline that normally would follow."
*
As a side note, some of the comments to the article show that these folks are (1) clueless as to the true history of the country versus the bogus version sold to them by "men of God" and (2) in many cases down right deranged mentally.
Posted by Michael-in-Norfolk at Friday, July 11, 2008

You should try living amongst them. And I have to call this my hometown! If you want a good little documentary of life here among the crazies, rent "Small Town Gay Bar."