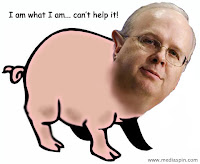 I truly hope that the Congressional Democrats play hardball with Rove who has got to be one of the nastiest pieces of shit to come along in a long while on the political scene. He's a turd alright, but I fail to see any blossom whatsoever. But then, it's the Chimperator who made up that stupid nickname, so what can one expect. Nothing would satisfy me more than to see his fat, nasty ass in a jail cell for contempt. His offer to testify informally is nothing less than bullshit. He needs to be under oath with a court reporting transcribing his answers so that when it turns out he has lied - which in my view is pretty much whenever his lips are moving - he can be prosecuted for perjury and duly locked up. I recall Don Siegelman from my days living in Alabama, and I place more credence on ANYTHING he might say rather than on statements by Rove. Here are highlights from MSNBC:
*
WASHINGTON - Former White House adviser Karl Rove defied a congressional subpoena and refused to testify Thursday about allegations of political pressure at the Justice Department, including whether he influenced the prosecution of a former Democratic governor of Alabama. Rep. Linda Sanchez, chairman of a House subcommittee, ruled with backing from fellow Democrats on the panel that Rove was breaking the law by refusing to cooperate — perhaps the first step toward holding him in contempt of Congress.
*
Rove says he is bound to follow the White House's guidance, although he has offered to answer questions specifically on the Siegelman case — but only with no transcript taken and not under oath. Democrats have rejected the offer because the testimony would not be sworn and, they say, could create a confusing record.
*
Siegelman and others have alleged the prosecution was pushed by GOP operatives — including Rove, a longtime Texas strategist who was heavily involved in Alabama politics before working at the White House. A former Republican campaign volunteer from Alabama told congressional attorneys last year that she overheard conversations suggesting that Rove pressed Justice officials in Washington to prosecute Siegelman.
Posted by Michael-in-Norfolk at Thursday, July 10, 2008