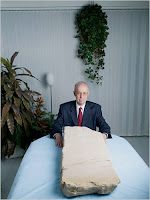 I'm not sure what this discovery will lead to, but it definitely could lead to some changes in Biblical history as it has been known to date. What is the discovery? A stone tablet that scholars believe dates from the decades just before the birth of Jesus is causing a quiet stir in biblical and archaeological circles, especially because it may speak of a messiah who will rise from the dead after three days. That's right - it references the Messiah's death and resurrection before Christ was born. The reality is that there were a number of death and resurrection themed religions before Christ and the onset of what became Christianity, aspects of the cult of the Egyptian goddess Isis being but one. There are also certain "sacrifice" parallels from the cult of Mithras which is thought to have originated in Persia. All of these historical realities, of course, are utterly ignored by fanatical Christianists who have - in my opinion - what is actually a very fragile and rigid belief system that affords no room for variance from their "infallible" Bible. In fact, as I view it, once a part of their belief system begins to unravel, the whole construct begins to collapse, which may be why they are so terrified of anything that doesn't fit their construct - e.g., that God made gays just as we are. Hence, it will be interesting to see what grows out of this discovery. Here are some highlights from the New York Times:
*
JERUSALEM — A three-foot-tall tablet with 87 lines of Hebrew that scholars believe dates from the decades just before the birth of Jesus is causing a quiet stir in biblical and archaeological circles, especially because it may speak of a messiah who will rise from the dead after three days. If such a messianic description really is there, it will contribute to a developing re-evaluation of both popular and scholarly views of Jesus, since it suggests that the story of his death and resurrection was not unique but part of a recognized Jewish tradition at the time.
*
The tablet, probably found near the Dead Sea in Jordan according to some scholars who have studied it, is a rare example of a stone with ink writings from that era — in essence, a Dead Sea Scroll on stone. . . . its authenticity has so far faced no challenge, so its role in helping to understand the roots of Christianity in the devastating political crisis faced by the Jews of the time seems likely to increase.
*
Daniel Boyarin, a professor of Talmudic culture at the University of California at Berkeley, said that the stone was part of a growing body of evidence suggesting that Jesus could be best understood through a close reading of the Jewish history of his day. “Some Christians will find it shocking — a challenge to the uniqueness of their theology — while others will be comforted by the idea of it being a traditional part of Judaism,” Mr. Boyarin said.
*
Ms. Yardeni, who analyzed the stone along with Binyamin Elitzur, is an expert on Hebrew script, especially of the era of King Herod, who died in 4 B.C. The two of them published a long analysis of the stone more than a year ago in Cathedra, a Hebrew-language quarterly devoted to the history and archaeology of Israel, and said that, based on the shape of the script and the language, the text dated from the late first century B.C.
*
[T]he specific messianic figure embodied on the stone could be a man named Simon who was slain by a commander in the Herodian army, according to the first-century historian Josephus. The writers of the stone’s passages were probably Simon’s followers, Mr. Knohl contends.. . . . He says further that such a suffering messiah is very different from the traditional Jewish image of the messiah as a triumphal, powerful descendant of King David. “This should shake our basic view of Christianity,” he said as he sat in his office of the Shalom Hartman Institute in Jerusalem where he is a senior fellow in addition to being the Yehezkel Kaufman Professor of Biblical Studies at Hebrew University. “Resurrection after three days becomes a motif developed before Jesus, which runs contrary to nearly all scholarship. What happens in the New Testament was adopted by Jesus and his followers based on an earlier messiah story.”
*
“His mission is that he has to be put to death by the Romans to suffer so his blood will be the sign for redemption to come,” Mr. Knohl said. “This is the sign of the son of Joseph. This is the conscious view of Jesus himself. This gives the Last Supper an absolutely different meaning. To shed blood is not for the sins of people but to bring redemption to Israel.”
Posted by Michael-in-Norfolk at Sunday, July 06, 2008

It is highly probable this "ancient tablet" is simply another sensationalist scam, as is clearly indicated by the facts

(1) that no specific information is available on its provenance and

(2) that no details are provided on carbon dating of the ink.

As such, this "news" falls right in line with the faked Lost-Tomb-of-Jesus "documentary" designed to make a profit off of people's fascination with the "real" Jesus, and with the larger scandal of the biased and misleading way the Dead Sea scrolls are being presented in museum exhibits around the world, with an antisemitic expression appearing on a government-run North Carolina museum's website. See, e.g.,