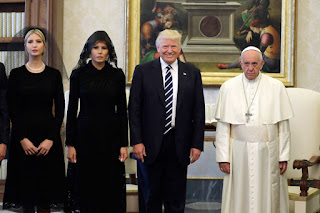 The first half of the title to this post comes from Andrew Sullivan's piece in New York Magazine.  While the piece begins with a consideration of the values of the Pope versus Donald Trump, it raises the larger issue of what kind of moral decay - indeed, total moral bankruptcy - has overcome Christians and evangelical Christians in particular that they embraced (and continue to embrace) a man who is the antithesis of Christian values as laid out in the Gospels.   In my view, anyone who claims to be a devout Christian who voted for Trump is a liar and a hypocrite.  And don't blather on about the need to put a "conservative" justice on the Supreme Court as a defense of people who have shown their true colors as modern day Pharisees of the first order.  Trump, as Sullivan brilliantly lays out should be opposed and viewed with horror by real Christians - which of course, excludes the Christifascists who are Christian in name only and who deserve to be treated with contempt by truly moral and decent individuals and a responsible media.  Here are article highlights:

The contrast between a grim-faced pope and the grinning president at the Vatican this past week was not lost on the press or late-night TV. But they missed the mark, it seems to me. They noted merely that the two leaders profoundly disagree on, say, the dignity of immigrants, the sanctity of heterosexual marriage, or the urgency of tackling climate change. While these disagreements exist, they are, it seems to me, merely symptoms of a deeper chasm — the vast, empty, and dark space that lies between Donald Trump and anything resembling Christianity.

[T]here is plenty of scope for disagreement about how to translate a Christian worldview into secular politics, or whether to translate it at all. But I do believe there is a Christian set of core human virtues and values, rooted in what we Catholics still think of as the truth, and that those virtues are rooted in the Gospels. . . . when you think about those virtues, it is very hard to see Donald Trump as anything but a living, breathing, shameless refutation of every single one.

Trump is not an atheist, confident yet humble in the search for a God-free morality. He is not an agnostic, genuinely doubtful as to the meaning of existence but always open to revelation should it arrive. He is not even a wayward Christian, as he sometimes claims to be, beset by doubt and failing to live up to ideals he nonetheless holds. The ideals he holds are, in fact, the antithesis of Christianity — and his life proves it. He is neither religious nor irreligious. He is pre-religious. He is a pagan. He makes much more sense as a character in Game of Thrones, a medieval world bereft of the legacy of Jesus of Nazareth, than as a president of a modern, Western country.

He loves the exercise of domination, where Christianity practices subservience. He thrills to the use of force, while Jesus preached nonviolence, even in the face of overwhelming coercion. He is tribal, where Jesus was resolutely universal. He is a serial fantasist, whereas Jesus came to reveal the Truth. He is proud, where Jesus was humble. He lives off the attention of the crowd, whereas Jesus fled the throngs that followed him. He is unimaginably wealthy, while Jesus preached the virtue of extreme poverty. He despises the weak, whom Jesus always sided with. He lies to gain an advantage, while Jesus told the truth and was executed for it. He loathes the “other,” when Jesus’ radical embrace of the outsider lay at the heart of his teaching.

If Trump were to issue his own set of beatitudes, they would have to be something like this:

The week Trump visited the Vatican, a transcript of his April 29 phone call with the president of the Philippines, Rodrigo Duterte, leaked. In it, Trump tells Duterte that his extrajudicial murders of hundreds suspected of being in the drug trade was “an amazing job.” Trump’s proposed budget, released this week, would eviscerate basic support for the poor in order to reward the already stupendously superrich, and would lay waste to the natural world so that our collective wealth, already greater than any country’s in human history, could be goosed some more. His party’s health-care plan would throw 23 million people off their insurance, even as he pretends it will cover everyone. Every pillar of Trump’s essential character is a cardinal sin for Christians: lust, gluttony, greed, envy, anger, and pride.

I will never understand how more than half of white Catholics could vote for such a man, or how the leadership of the church could be so terribly silent when such a monster stalks the earth.

Then there was his choice to visit Saudi Arabia as his first foreign trip. Of all the countries!  He picked a gruesome, militarized, misogynist dictatorship, that . . . . imports millions of foreign workers in what amounts to near-slavery conditions and that refuses to cooperate in efforts to restrain human trafficking. In a week when extreme Sunni terrorism claimed yet more lives in Manchester, Trump visited the country that was central to spreading Wahhabist ideology and Salafist theology throughout the world in the first place, that funded the precursor to ISIS, that denies minimal freedom of religion, and that gave us the perpetrators of 9/11.

If one voted for Trump, no amount of feign piety at church services will undo the stain.  You had the choice between an admittedly flawed candidate in the form of Hillary Clinton and instead voted for one that embodies evil and who has demonstrated throughout his life that he is the opposite of true Christian values.   One irony to me is that increasingly it is the gays and many non-Christians - even atheists - who now support the Gospel social message far more than the nominal Christians who wear their pretend religiosity on their sleeves.  Needless to say, I will not be going to church again any time soon since those who actually live the valuers of the Gospel are not found within church walls. Meanwhile the number of "Nones" is increasing rapidly.
Posted by Michael-in-Norfolk at Monday, May 29, 2017