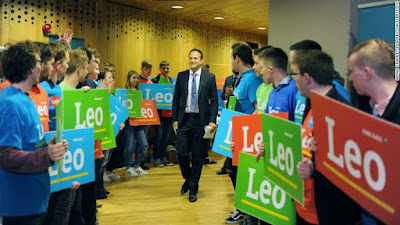 In yet another display of how low the Roman Catholic Church has fallen in Ireland, Leo Varadkar, a 38 year old gay man, was elected prime minister yesterday.  Also of note is that Varadkar's father was from India and married his Irish mother.  CNN looks at this surprising development which represents yet another rebuke to the homophobic Catholic Church which has already been savaged by public reaction to the Church's institutional cover up of sexual abuse of children and youths that went on for many decades, if not centuries.   Here are brief highlights:

Ireland is to get its youngest prime minister, and the first who is openly gay.

Leo Varadkar, the 38-year-old Minister for Social Protection, was elected leader of the ruling Fine Gael party on Friday. He will be confirmed as Taoiseach, or prime minister, when the Irish parliament reconvenes on June 13. The outgoing Taoiseach, Enda Kenny, stepped down as party leader in May, a position he held since 2002. Varadkar was backed by a majority of the Fine Gael's local council members and, crucially, 51 of its 73 parliamentary colleagues, whose votes counted for 65% of the total.  Varadkar said he was "delighted and humbled" at the result. Varadkar, the son of an Indian-born father and Irish mother, became a doctor before first entering Irish parliament at the age of 27.
In 2015, as Minister of Health, Varadkar came out on Irish national radio, joining a handful of other openly gay politicians in Ireland in support of the Marriage Equality Bill, which allows same sex couples to marry. Varadkar might seem to be an unexpected pick for leader of Ireland -- a country that's still finding its secular European footing after years of church influence over the state.
Varadkar is expected to officially take up the role as Taoiseach on June 13 after a formal confirmation from parliamentary members.