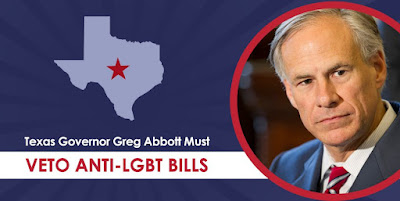 Republicans in Texas like to brag that the state has lead the nation in job creation.  What they leave out is the fact that the vast majority of jobs have been low paying jobs with no benefits.  They also leave out the fact that California, a state that is maligned by wingnuts and Republicans for being "liberal" is far out performing Texas in terms of job creation.  Facts, of course, do not matter the the GOP or their brain dead supporters. Now, having learned nothing from North Carolina's HB2 debacle and the self-inflicted economic harm that arose therefrom, Texas Republicans are hell bent to pass myriad anti-LGBT laws before the legislative session ends.  Indeed, Texas' lunatic governor has threatened to call a special session if the legislation fails to pass before the end of the regular session. Fourteen (14) major corporations have now warned Texas against pursuing the Christofascist inspired bills.  The Dallas Morning News looks at this development.  Here are excerpts:

The CEOs of 14 top companies, including Facebook, Apple, Microsoft and Amazon, have sent a letter to Gov. Greg Abbott urging him not to pass discriminatory legislation.

"As large employers in the state, we are gravely concerned that any such legislation would deeply tarnish Texas' reputation as open and friendly to businesses and families," the CEOs wrote Abbott in a letter dated May 27. "Our ability to attract, recruit and retain top talent, encourage new business relocations, expansions and investment, and maintain our economic competitiveness would all be negatively affected.

The letter, which has not been made public but was released to The Dallas Morning News, was sent just days before state lawmakers were scheduled to gavel out the 2017 regular legislative session. The year's most controversial and divisive issue has been a Senate proposal to block transgender Texans from using restrooms that match their gender identities.

Abbott has urged lawmakers to find a compromise on this issue before they're scheduled to go home on Tuesday, but the Republican leaders of the House and Senate have been at loggerheads over the issue for months.

The disagreement reached a head Friday, with House Speaker Joe Straus refusing to pass legislation he said could harm "some very vulnerable young Texans." Lt. Gov. Dan Patrick, who heads the Senate, then asked Abbott to make lawmakers stay until they passed a so-called bathroom bill.

Business groups have openly objected to this and other legislation that they say would hurt Texas' lesbian, gay, bisexual and transgender community, but the opposition has done little to thwart Patrick's efforts.

Abbott's and Patrick's self-prostitution to Christian extremists and "family values" hate groups would make a tawdry whore look virtuous.  Unfortunately, neither Abbott nor Patrick is alone in the GOP when it comes to such self-prostitution to hate group extremists and is a main reason why I do all I can to oppose EVERY Republican candidate anywhere in America. Only by electoral defeats and continued harsh economic backlashes to GOP bigotry and misogyny will the GOP do what it has needed to do for decades now: cast out the Christofascists and send them into permanent political exile.
Posted by Michael-in-Norfolk at Tuesday, May 30, 2017