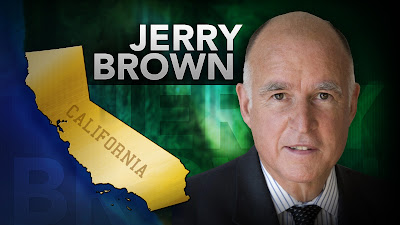 California dwarfs all other American states both in the size of its population (approximately 40 million) and in terms of its economy (which exceeds that of France and Brazil).  Indeed, if it were a separate country, California would currently be in the top six largest economies in the world.  In contrast, think of Wyoming or Montana that have populations and economies smaller than some counties in California (e.g. the City of Sam Jose has a population larger than Montana and a many times over larger economic output).  Combine this with a Democrat/liberal political dominance and forward thinking - in contrast to for example West Virginia or Kentucky that are at war with science and modernity - and California wields the influence of many foreign nations.  Now, with Der Trumpenführer's announcement that he wants to withdraw America from the Paris Climate Change accord, California is poised to wield its muscle.  A piece in Politico looks at this development.  Here are excerpts:

For the past two years, California Gov. Jerry Brown has been aggressively recruiting other state and local governments to sign onto their own, sub-national climate pact.

But that campaign has taken new urgency under President Donald Trump, who announced Thursday that he’ll withdraw the United States from the Paris climate agreement. It’s a reflection of the roiling conflict between the president and the nation’s most populous state, but also the ambition of a governor who, after a lifetime in politics, is seizing an unexpected opening on an international stage.

“I’m on the side of the angels,” the former Jesuit seminarian said in an interview before flying on Friday to China, where he will rally support for his climate policies next week. “I’m going to do everything I can, and people are going to join with me.”

Brown, now 79 and in his final term, has long championed environmental causes, promoting conservation and smog-related policies when he was governor before, from 1975 to 1983, and overseeing a dramatic expansion of California’s greenhouse gas reduction standards since returning to office in 2011. Roughly 170 jurisdictions, including Canada and Mexico, have endorsed Brown’s non-binding agreement embracing efforts to limit global temperature rise to below 2 degrees Celsius, the threshold beyond which many scientists predict catastrophic consequences.

But world leaders, not governors, sign international agreements with the force of law, and for years Brown was relegated to a supporting role. Only after the election of Trump, who has called climate change a hoax, did Brown’s climate diplomacy find new prominence as a counterweight to a Republican-held White House.

He called the withdrawal “insane” and said, “California will resist.”

Brown and the governors of New York and Washington said they would establish a coalition of states committed to upholding the Paris accord, while 27 California state senators sent a letter to Brown urging him to convene a climate summit with “like-minded states and subnationals from around the world, to ensure that we continue to charge ahead without forfeiting all of our historic progress to date.”

Trump’s disengagement from international climate politics has left open a political opportunity for Brown, with climate-minded politicians abroad running into resistance in Washington seeking other partnerships in the United States. Even if Trump had remained in the Paris accord, his rejection of mainstream climate science was broadly seen as increasing the significance of climate change efforts at the local and state level, with California at the forefront. Brown, who ran unsuccessfully for president three times but is now seeking no higher office, has little to lose. His public approval rating remains high in a heavily Democratic state that contributed significantly to Trump’s loss of the popular vote last year, and the state legislature has pushed forward with a raft of climate legislation to gird against Trump administration policies.

Earlier this week, the state Senate passed one bill requiring utilities to obtain 100 percent of their electricity from renewable sources by 2045 and another folding Obama-era water, air and engendered species standards into state law, preserving them in California regardless of reversals at the federal level.

California exemplifies why it is crucial that Democrats be elected to the governorships of as many states as possible, including Virginia this November.   They are critical to the resistance against the foul policies of Der Trumpenführer and the Vichy Republicans in Congress.
Posted by Michael-in-Norfolk at Friday, June 02, 2017