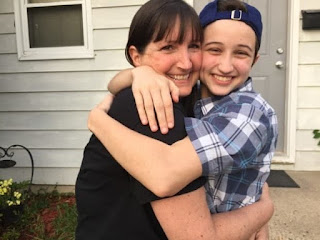 With the many setbacks that the LGBT community is experiencing under the Trump/Pence regime and the reign of terror of Republican controlled state legislatures, it is nice to find some positive news.   Such welcome news took the form today in a ruling by the U.S. Court of Appeals for the 7th Circuit which ruled in favor of a transgender student's right to use the restroom that matches his gender identity.  The ruling follows on the positive ruling of the 4th Circuit that never saw fruition since Gavin Grimm graduated from high school and the case became moot.  BuzzFeed looks at today's ruling.  Here are highlights:

A federal appeals court on Tuesday ruled in favor of a transgender student's challenge to a Wisconsin school district's policy limiting his restroom usage — a big win for those seeking to advance transgender rights in the courts.

The decision of a unanimous three-judge panel of the US Court of Appeals for the Seventh Circuit keeps in place a district court's preliminary injunction halting enforcement of the Kenosha Unified School District's policy against the student, Ash Whitaker.

"The School District has not demonstrated that it will suffer any harm from having to comply with the district court’s preliminary injunction order," the appeals court — which hears cases from Illinois, Indiana, and Wisconsin — held.

The appeals court upheld the lower court's rulings in favor of Whitaker on both statutory and constitutional grounds, finding that he is likely to succeed on his claim that he is protected from discrimination under the sex discrimination ban in Title IX of the Education Amendments of 1972 because he is transgender and that the school district's policy violates the Equal Protection Clause of the Fourteenth Amendment.

Regarding the constitutional argument, she noted that "the School District argues that since it treats all boys and girls the same, it does not violate the Equal Protection Clause."

"This is untrue," Williams wrote for the court. "Rather, the School District treats transgender students like Ash, who fail to conform to the sex‐based stereotypes associated with their assigned sex at birth, differently."

Because of that, Williams explained the school district would have to show "exceedingly persuasive" reasons justifying the policy.

"This burden has not been met here," she wrote.

Specifically, Williams wrote, "The School District has failed to provide any evidence of how the preliminary injunction will harm it, or any of its students or parents. The harms identified by the School District are all speculative and based upon conjecture, whereas the harms to Ash are well‐documented and supported by the record."