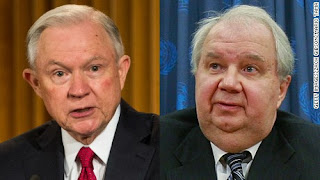 Prior posts have made it very clear that I view Attorney General Jeff Sessions as a miserable excuse for a human being.  My feelings date all the way back to my days in Mobile, Alabama when Sessions refused to prosecute KKK members who lynched a young black man in Mobile.  Combine  Sessions' flaming racism with his homophobia and apparent constant lying to Congress and it ought to be obvious to anyone other than a white supremacist and/or Christofascists - my "friends" who voted for Trump and support Sessions can pick which of these two best describes them - that Sessions is unfit for the office of Attorney General of the United States of America.  Now, on top of all of this, it appears that Sessions may have had another secret meetings with the Russian ambassador - a meeting that he never disclosed to Congress even in his "corrected" disclosure.  Here are highlights from CNN:

Congressional investigators are examining whether Attorney General Jeff Sessions had an additional private meeting with Russia's ambassador during the presidential campaign, according to Republican and Democratic Hill sources and intelligence officials briefed on the investigation.

Investigators on the Hill are requesting additional information, including schedules from Sessions, a source with knowledge tells CNN. They are focusing on whether such a meeting took place April 27, 2016, at the Mayflower Hotel in Washington, DC, where then-candidate Donald Trump was delivering his first major foreign policy address. Prior to the speech, then-Sen. Sessions and Russian Ambassador Sergey Kislyak attended a small VIP reception with organizers, diplomats and others. In addition to congressional investigators, the FBI is seeking to determine the extent of interactions the Trump campaign team may have had with Russia's ambassador during the event as part of its broader counterintelligence investigation of Russian interference in the election. The FBI is looking into whether there was an additional private meeting at the Mayflower the same day, sources said.
Sessions has previously failed to disclose meetings with Russian officials. During his confirmation hearing on January 10, Sessions testified that he "did not have any communications with the Russians" during the campaign. He also said in a written statement submitted to the Senate judiciary committee that he was not in contact with anyone linked to the Russian government during the election. Those answers became problematic for Sessions when reports emerged in March that he did have two meetings with Kislyak during the campaign -- one at the Republican National Convention in July and one in his Senate office in September.
[W]hen Sessions updated his sworn testimony to the Senate judiciary committee, he acknowledged the two meetings with Kislyak but did not mention any encounter at the Mayflower Hotel. Russia was already trying to help Trump before the Mayflower Hotel speech, according to a US intelligence community assessment released in January. The report concluded that by March 2016, Kremlin-backed news outlets began supporting Trump and Russian military intelligence had kicked off its election-related cyber operations.


Sessions needs to resign immediately.  Prosecution for perjury and contempt of Congress are also in order.