On Kushner, There’s No Innocent Explanation 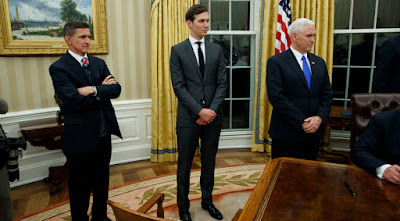 Trump apologists - which, of course includes Fox News and almost every Congressional Republican other than perhaps Lindsey Graham and John McCain on some occasions - continue to concoct explanations for Jared Kushner's secret meeting with Russian officials to set up a "back channel for communications" using Russian Russian intelligence and communication facilities.  Anything rather than admit that a Russian agent is now ensconced in the White House.  Disturbingly, many in the news media parrot the latest excuse with little critical analysis of how untrue and preposterous the excuses may be.   A piece in Talking Points Memo looks at the various excuses and rightly calls them out as bull shit and lies.  Here are excerpts:

I’ve written elsewhere about possible ‘innocent explanations’ of the Trump/Russia story, particularly Donald Trump’s role in it. I will leave that all-encompassing question aside for the moment. Here I’m talking about Jared Kushner’s attempt to set up a secure line of communication to Moscow, as well as meeting with the head of that government-backed Russian bank.

In commentary on these revelations we’re hearing a variety of possible explanations. The first was that this was an attempt to hold confidential discussions over Syria. As we’ve discussed, that’s very hard to believe. There are plenty of ways to have those conversations, plenty of ways to get detailed briefings on whats happening in country. None of them involve or require what Kushner was trying to do.

In the last 48 hours, we’ve increasingly heard it suggested that the issue was Kushner’s naïveté or inexperience in government. Perhaps he simply didn’t realize that this would be a problem. Let’s call this the ‘naive Jared’ theory. Like the Syria back channel it simply does not add up. I would say it’s absurd on its face. But if you don’t buy that, remember that Mike Flynn was there too when this was discussed.  . . . We may find out many things about Michael Flynn. But not one of them will be that he lacked the most basic understanding of how the US government or security apparatus worked. So the naïveté argument is ruled out.

There’s one other argument that gets tossed around a lot now and seems widely believed even though I think there’s little to no basis for it. Even if it’s paranoid or weird or suspicious it’s now treated as a given that the Trump Team was wary of being monitored by the Obama administration. But is there really any evidence of that? Not really.  If anything, the Obama team – operating largely at the then-President’s direction – seemed fairly accommodating.

The idea that the Trumpers were afraid of being surveilled by the Obama team is something we’ve now projected back onto the transition because of things that happened months later – specifically, President Trump’s early March claim that Obama had “wire-tapped” him in 2016.

The idea that Kushner and Flynn would use Russian secure communications facilities to set up a secure channel to Moscow is so inexplicable and beyond the pale that it almost beggars the imagination. Critically, this key part of the story has not been disputed by the White House. The only possible explanation of this effort is that Flynn and Kushner (perhaps others, but at least them) wanted to discuss topics that would not only be hidden from Obama administration political appointees but from everyone in the US government – people who would continue to make up the government long after the Obama team was gone.

I concur with the author.  I think were are talking about possible treason, plain and simple.