France's New President (Unlike Trump) Stands Up to Putin 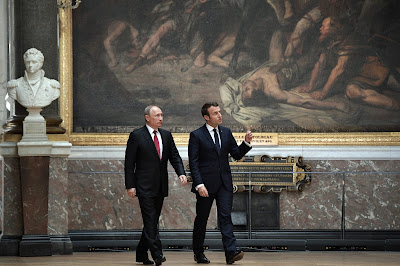 I have always liked France and the French, perhaps because I am part French due to my grandmother's New Orleans French ancestry, my knowledge of French history and love of Paris, and knowledge that but for France and the French fleet, American forces would likely have been defeated at the battle of Yorktown (where we were yesterday for a wedding in a Revolutionary era B&B).  Now, France's newly elected president, Emmanuel Macron, has added to the list of reasons to admire France.  In his first meeting with Russian dictator, Vladimir Putin, Macron stood up to Putin and even challenged him over the anti-gay pogroms that are ongoing in Chechnya.  Donald Trump, in contrast, has more or less kissed Putin's ass and seemingly acted on Putin's script to damage U.S. - European relations.  A piece in Politico looks at Macron's impressive performance.  Here are highlights:

The official line on the first meeting between Emmanuel Macron and Vladimir Putin was that it was “frank” and “open” and covered Syria, Ukraine and a host of other topics — but the differences between the two leaders were plain to see.

The new French president struck a firm, at times defiant tone. There was even a flash of anger when the subject of election hacking was brought up. He said Russian state-backed media outlets RT and Sputnik “did not behave like press outlets, but behaved like agents of influence and propaganda” which spread “serious falsehoods.” “I will never give in to that,” he said while standing next to Putin.

There were less awkward moments. Speaking to journalists at the Versailles palace, the two leaders said they had agreed to restart talks on Ukraine in the “coming days and weeks” under the so-called Normandy format — referring to four-way consultations between Ukraine, Russia, France and Germany that have been paused.

“No essential topic can be addressed without dialogue with Russia,” Macron said during their joint news conference in the Gallery of Battlesk, a huge gilded hall covered in paintings depicting scenes of war. “It was a frank exchange, extremely direct … We share disagreements, but we also see how to construct a common action.”

While Putin was granted a statesman’s welcome in grand surroundings, at times he looked uncomfortable during his brief appearance with Macron in front of journalists.

The Russian leader, who had not been to France since 2015, offered brief answers to just four questions from some 200 journalists in the room, dismissing one about election meddling as something that “does not exist.”

The only time he went into anything approaching detail was to offer a defense of his decision to meet far-right leader Marine Le Pen during France’s presidential campaign — a meeting he said had been initiated by the National Front leader.

Macron, just back from a G7 meeting in Sicily, wasn’t so shy about speaking out. On Syria, he said “any use of chemical weapons” would prompt an “armed response,” and added that France would “remain vigilant” on human rights issues including abuses of gay people in Chechnya and the treatment of non-governmental organizations in Russia.

Macron’s team wanted Putin to feel more welcome than challenged. They used an exhibit on Peter the Great’s 1717 visit to Versailles as an excuse to invite Putin to France, a move that was both deliberate and designed to speak to Putin’s notions of his own importance.

Macron aides insisted on the need to re-establish a working relationship after a bad patch in Franco-Russia ties under his predecessor François Hollande.

“This is a new departure in our relations,” Russia’s ambassador to Paris, Alexandre Orlov, told the RIA Novosti agency. “It seems that between Macron and Vladimir Vladimirovich [Putin], there are many common points, and they should be able to understand each other well.”

France, unlike America at the moment, has a president who is intelligent, informed, and concerned with more that fanning his own insatiable ego.  Then, of course, there is the issue that unlike Trump, Macron was not put in office thanks to Russian electoral subterfuge and sabotage.