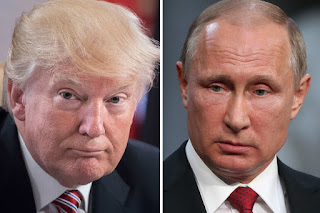 As noted in prior posts, Donald Trump's trip to Europe by all appearance focused on what the Soviet Union and now Russia have tried to accomplish for the last 72 years: breaking up the NATO alliance and making Russian aggression less likely to face a major military challenge. As noted previously, Germany has stated that given Trump's behavior, Europe needs to plan for its own future and not rely on a now unpredictable and unreliable America.  It's little wonder that many Russians are believing that Trump is a Putin asset.   Frankly, I am inclined to agree with them.  A piece in New York Magazine looks at the pieces that go into the puzzle of viewing Trump as an agent of Putin and, if the picture is true, a traitor.  Here are excerpts:

Indeed, in another one of dramatic juxtapositions that would have seemed ham-handed in a spy thriller, the latest scandalous revelations came out just as Trump could be seen carrying out what looks for all the world like his end of a pact with Moscow. If the president did have an objective on his trip to Europe — a premise that, it goes without saying, cannot be assumed — it was to crack up the American alliance with Western Europe. That happens to have been Russia’s primary diplomatic objective since the end of World War II. In Brussels, Trump refused to publicly affirm the Article 5 guarantee of the NATO charter — the foundation of the anti-Russian alliance, and the basis for Europe’s defense against Russian aggression. He directed his trademark wild diatribes against Germany, accusing it repeatedly of abusive trade relations, despite the fact that the United States does not have bilateral trade relations with that country. Amazingly, he kept up the abuse on Twitter after returning Stateside, while simultaneously defending Russia over its intervention in the American election.

The White House’s account of Kushner’s back-channel talks with Russia, as Will Saletan shrewdly points out, does not square with what the administration has said in the past, or what Russia says now.

Trump is easily manipulated by flattery, and instinctively drawn toward autocrats. His obvious warmth and comfort with the Saudis, who feted him in their palaces in a pleasantly dissent-free atmosphere, dissent being a crime punishable by death, presented an obvious contrast to his discomfort with the democratic leadership of America’s allies. Perhaps his fondness for Putin, while at odds with what was once a consensus bipartisan opposition to Russian aggression, simply reflects Trump’s natural moral instincts rather than a secret deal.

Yet the sinister explanations remain plausible, too. And increasingly so. Here is one sentence from the Post’s Friday-night bombshell that is worth thinking over: “The Post was first alerted in mid-December to the meeting by an anonymous letter, which said, among other things, that Kushner had talked to Kislyak about setting up the communications channel.”

The Post got this tip, from a source purporting to be inside the Trump transition, in December. It took until Memorial Day weekend for the newspaper to authenticate it. The small aside — “among other things” — casually tells readers that this explosive story was just one allegation in the letter. There is more to come.


For myself, things are to a point where I will assume that Trump and a Russian asset until it is proven otherwise.  Anyone who is innocent of such charges would not be acting as Trump has  acted.  Then, of course, there is the issue of his incessant lying. He does not deserve the benefit of the doubt - nor does anyone in his administration.