Germany: In light of Trump, Europe Must Be Self-Reliant 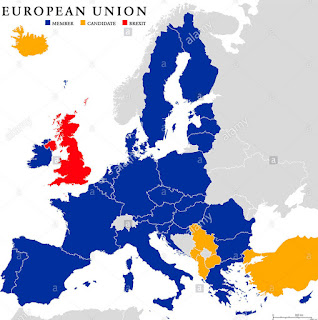 Two opposing trends are taking place in Europe.  On the one hand, as reported by the Washington Post, in recognition of the reality that under Donald Trump, a/k/a Der Trumpenführer, the United States can no longer be deemed a dependable ally, Europe must move toward being self-reliant, both economically and militarily.  Meanwhile, through Brexit, Britain (which is more inclined to follow GOP style trickle down economics) is withdrawing from the European Union and will be isolating itself and in the view of many harming its economy by exacerbating problems that have made it increasingly less prosperous than France and Germany.   The Brits, like far too many Americans, seemingly embraced racism, bigotry and xenophobia and closed their eyes to the fact that they were voting against their own economic interest.  It may feel satisfying to look down on and denigrate "Those People," but as a piece in the New York Times lays out, the cost for that fleeting sense of self-satisfaction will be painful.   Let's hope the push by German and France for more unity and strength are successful.  Many of the British will likely find themselves twisting on the rope they placed around their own necks.  First highlights from the Post piece:

German Chancellor Angela Merkel on Sunday declared a new chapter in U.S.-European relations after contentious meetings with President Trump last week, saying that Europe “really must take our fate into our own hands.”

It was the toughest review yet of Trump’s trip to Europe, which inflamed tensions rather than healed them after the U.S. president sparred with the leaders of Washington’s closest and oldest allies on trade, defense and climate change.

Merkel, Europe’s de facto leader, told a packed beer hall rally in Munich that the days when her continent could rely on others was “over to a certain extent. This is what I have experienced in the last few days.”

The comments came as Europe watches Britain preparing to leave the European Union and faces antagonism from Washington.

Although relations between Washington and Europe have been strained at times since 1945, before Trump there has rarely been such a strong feeling from European leaders that they must turn away from Washington and prepare to face the world alone.  . . . . Although her message was partly aimed at her electorate, it was a measure of how badly relations have deteriorated with Trump’s United States that hitting Washington might win votes, while working with it could be perilous.

The remarks were a clear repudiation of Trump’s troubled few days with European leaders, even as Merkel held back from mentioning the U.S. president by name.

“The belief in shared values has been shattered by the Trump administration,” said Stephan Bierling, an expert on transatlantic relations at Germany’s University of Regensburg. “After the inauguration, everyone in Europe was hopeful that Trump would become more moderate and take into account the positions of the G-7 and of NATO. But the opposite has happened.

[M]any European leaders emerged from their meetings with Trump filled with fresh worry. Trump was far more solicitous toward the autocratic king of Saudi Arabia earlier in the week, telling him and other leaders of Muslim-majority countries — many of them not democratically elected — that he was not “here to lecture.” Days later in Brussels he offered a scathing assessment of Washington’s closest allies, saying they were being “unfair” to American taxpayers.

[A]s Merkel positions herself ahead of the election, the message could be the signal of a shift away from the United States, perhaps even one that could outlast Trump’s time in office, and that would weaken U.S. global power over the long term. European leaders are developing plans to deepen military cooperation independently of the United States. They are also reaching out to economic partners in Asia that Trump has spurned. All of those shifts will have consequences that extend years, analysts say.


As noted, meanwhile, Britain continues its path to self-inflicted harm.  Here are excerpts from the piece in the New York Times:

An observer of Britain’s “Brexit” debate would be forgiven for thinking that the country’s economy is one of the European Union’s star performers. Brexit’s advocates rarely pass up an opportunity to claim that the European Union economy is the world’s weak link, and that Britain’s reformed, dynamic and flexible economy has little to risk, and much to gain, from leaving it. The reality is rather different. And Brexit threatens to make matters worse.

Britain’s economic performance relative to the other big economies in Western Europe — including France, Germany, Italy and Spain — does not stand out as impressive, at least once the different prices of goods and services across these countries are factored in. . . . . British economic growth between 2000 and 2015 lagged behind Spain and Germany.

Sustainable increases in living standards require economies to combine land, labor, capital and technology in more efficient ways; Britain has made a poor job of this, helping to explain why Britons’ wages have risen by much less than their French and German counterparts over the last 15 years.

If the country’s overall performance looks mediocre, note that it is also highly skewed by London and the southeast of England. . . . . since 2000, poorer regions of Britain have not been catching up with the richer regions of the European Union. Instead, they’ve been falling further behind.

So, why has the country’s performance been so poor? . . . . Britain is generally perceived as a liberalized economy, and by some measures of labor market performance this is no doubt true: Non-wage labor costs, such as employer contributions, are low and it is easy to lay off workers, which reduces the costs of taking them on in the first place. But a successful labor market requires more than easy hiring and firing; it needs skilled workers, access to housing and good quality infrastructure. By these measures Britain has some real weaknesses.

A significantly higher proportion of British 18- to 24-year-olds suffer from weak literacy and numeracy than those in France, Germany, Italy or Spain. . . . . the country has invested less in roads, railways and air travel than other large European Union economies over the last 20 years.

A Britain outside of the European Union will inevitably be less open to trade with member states, which will curb competition and productivity growth. Tax revenues will fall, further squeezing infrastructure investment and education spending. That’s why, far from liberating Britain to conquer world markets as a buccaneering trading nation, Brexit threatens to make its mediocre economic performance even worse.

In many ways British voters who supported Brexit are like Trump voters: an unfounded belief in exceptionalism, opposition to spending on projects for the common good such as infrastructure and education.  Add in the rank racism and bigotry and the parallels are complete.
Posted by Michael-in-Norfolk at Monday, May 29, 2017