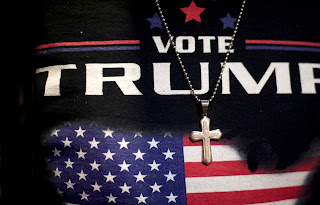 Throughout our lives we face many choices some of which are easy and others of which are difficult - for Fox News viewers, sexual orientation isn't one of them.  Often making decisions or failing to make them comes down to intellectual laziness and/or an unwillingness to face facts and knowledge that cut against childhood indoctrination.  Most of us grow up and come to think for ourselves.  One block of Americans do not: evangelical Christians.  When confronted with inconvenient facts - e.g., the human genome project says that Adam and Eve never existed as historical persons - the reaction of this group is to reject them and to double down in the embrace of ignorance and to cling more desperately to myths and fairy tales.  Anything and anyone that challenges their serious thought free "world view" is deemed an enemy and lashed out at. Gays represent by one group that challenges their childish beliefs and bigotries.  Which brings us to climate change where 72% of evangelicals refuse to believe in it.  A piece in the Washington Post looks at the deliberate embrace of a book authored by uneducated, Bronze Age goat herders over scientific acknowledge.  As the piece notes, climate change is but one of the numerous idiocies that the "godly folk" embrace.  Here are highlights:

The United States will withdraw from the Paris agreement on climate change, President Trump announced Thursday. Environmental scientists say the consequences could be catastrophic for the planet. But for some Trump supporters, there’s no reason to worry.

“As a Christian, I believe that there is a creator in God who is much bigger than us,” Rep. Tim Walberg (R-Mich.) told constituents last week at a town hall in Coldwater, Mich. “And I’m confident that, if there’s a real problem, he can take care of it.”
Among conservative evangelicals, that is not an unusual opinion. . . . only 28 percent of evangelicals believe human activity is causing climate change. Confidence that God will intervene to prevent people from destroying the world is one of the strongest barriers to gaining conservative evangelical support for environmental pacts like the Paris agreement. Climate change isn’t the first issue where such faith has presented itself. During the Cold War, premillennialist evangelicals, who believe that the Second Coming of Christ is imminent, argued that God wouldn’t allow humanity to destroy itself in a nuclear war. Conservative evangelicals during the Cold War often saw disarmament as a greater threat to the United States than the proliferation of nuclear weapons. Jerry Falwell adopted the slogan “Peace through Strength” in the early 1980s and declared that a nuclear freeze would be “national suicide.” Premillennialists such as televangelist James Robison preached that the Antichrist, who was destined to unite the world under his leadership, would use fear of nuclear weapons and a promise of peace to deceive the world into accepting world government. When scientists began sounding the alarm over climate change in the 1980s, conservative evangelicals, who had been somewhat accepting of environmentalism in the 1970s, became convinced that the Antichrist would use the fear of climate change to seize power. The 1970s environmental movement had enjoyed widespread support as it focused on smaller issues like pollution and litter. In the 1980s, though, scientists revealed problems like the depletion of the ozone layer and global warming, which required worldwide cooperation and significant economic changes to redress.  For Christians like Walberg, globalism is the most dire threat to the United States, not rising oceans and more powerful hurricanes. Just as conservative evangelicals opposed arms treaties during the Cold War, they see environmental pacts, like the Paris agreement, as paving the way for a charismatic world leader to form a global government and begin the seven-year Tribulation that precedes the Second Coming of Christ.  Trump’s anti-globalism was part of what made him attractive to conservative evangelicals in last year’s Republican primaries and the general election — and still now as president. Even if Trump’s personal life is an affront to Christian values, his message means that the United States will be standing against the potential forces of the Antichrist.  Trump doesn’t seem to have any firm beliefs, religious or otherwise. He didn’t pull us out of the Paris accord because he truly shares the conservative evangelical beliefs of many of his supporters and advisers. Still, by calling climate change a Chinese hoax, he’s shown a willingness to use similar arguments for his own purposes. We must accept that a number of conservative evangelicals, especially from older generations, will never support significant action on climate change, especially if it means signing a global treaty. Trump’s withdrawal from the Paris agreement has proven that he lacks the flexibility and foresight of Reagan, who dared negotiate with the country he declared an “evil empire.” But we can appeal to moderate and liberal evangelicals with different or milder end-times beliefs, and nonevangelical conservatives can still be convinced to cooperate if persuaded that inaction threatens U.S. standing in the world. We have no choice but to give up on Trump now, but maybe we can hope the party of Reagan will find the moral courage to combat climate change.

In my view, the author is too optimistic about the Republican Party.  Evangelical Christians are akin to a cancer within the party that has metastasized and rendered the party in a terminal condition.  As for the fears of an Anti-Christ , I would argue that their vote him in the White House.  The only way to deal with evangelicals is to reject them socially and politically.  Their "faith" - i.e., embrace of ignorance - deserves zero respect nor do they.  They constitute a clear and present danger to America.
Posted by Michael-in-Norfolk at Friday, June 02, 2017