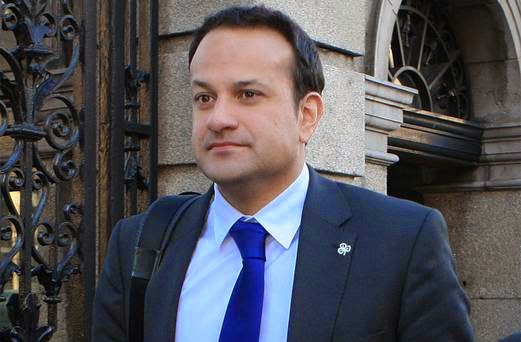 Over the weekend Irish Minister for Health, Leo Varadkar (pictured above), came out as gay during an interview. His move comes as Ireland prepares for a referendum on allowing same sex marriage in May, 2015.   It goes without saying that the morally bankrupt Catholic Church in Ireland is strenuously against same sex marriage and is engaging in scare tactics and lies worth of American Christofascist hate groups.  Varadkar's action has also caused a fair amount of news coverage and reflection as to why his declaration is even news worthy at the date in the 21st century.  Equally, it has caused some to look at the problem of internalized homophobia which keeps many gays either fully in the closet or closeted to friends and family.

Behind all of the fear and self-loathing is religion and its fruits of hate, fear and the embrace of ignorance.  These forces indoctrinate most of us growing up and the result is that it is very hard to let go of the old brainwashing.   For me, taking the first step of being able to stand in front of a mirror and say to myself "I'm gay, and I'm OK with that." was extremely hard.  Many in the LGBT community cannot fully take that step.  I know too many gays who remain closeted to family and self-flagellate, guaranteeing they will not find full happiness.  A piece in the Irish Examiner looks at the poison of internalized homophobia.  Here are highlights:

The main thing that struck me about Minister for Health Leo Varadkar’s interview with Miriam O Callaghan on RTÉ recently was not how articulate, courageous and open he was, although he was all of those and more.

Instead it was how awkward and painfully familiar it sounded.

Most gays have, at one time or another, sat in their closet as a conversation skirted dangerously close to the secret they were keeping; its content making the blood rush to our head and our hearts pound like a techno drumbeat.

It was a proud day for Ireland to say we had an openly gay minster in our cabinet. But there was also something deeply disconcerting about a grown man having to divulge the personal details of his sexuality so that he could go about doing the job he was elected to do.

Whatever Minister Varadkar’s reasons for speaking publicly, his conversation with O’Callaghan will inspire even those not enamored with his work as Minister for Health.

The worst homophobia I suffered was internalised. Even as I took those first tentative steps out of the closet, I was quick to reassure myself that I was ‘different’ from those other gays, the ones prancing in their underwear outside the Dáil, snogging on the streets during pride and generally fighting for my rights.

In my note coming out to my parents, I even stated that I wasn’t a ‘campaigning’ gay, as if that were something to be proud of. So I can identify with the minister’s discomfort as he was forced to detail his reasons for waiting. My heart went out to him as O’Callaghan was forced to ask for information we somehow feel we have the right to.

We’ve become so blasé as a society as to how difficult the act of coming out can be. Society may have moved on, but I’m still fairly sure I’m the only gay my father knows by name. Which would account for why he didn’t speak to me for a month after I came out. Not because he had an issue with it. But because he genuinely didn’t know what to say.

Maybe Varadkar’s disclosure will offer ease to parents shaken by the news their child is gay? That his sexuality wasn’t an inhibitor to him climbing to ministerial office? But mainly I hope it’s a stepping stone; that a ministers wish to be treated equally will be extended to all citizens, thereby removing the need for gays to ‘come out’.