Pope Francis vs. The Republican Agenda 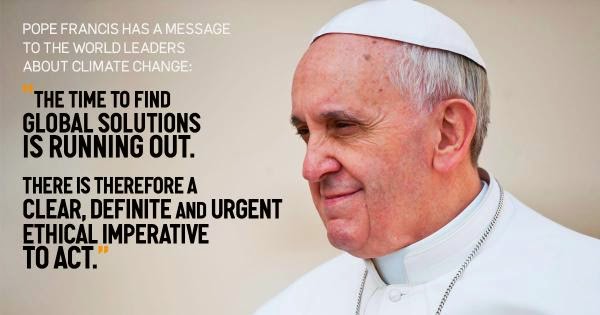 While Pope Francis' recent remarks in the Philippines against gay marriage indicate that he is clinging to the ignorant 13th century concept of "natural law" and rejecting modern knowledge, on climate change, Francis is taking a totally different approach: he's accepting scientific knowledge and sees climate change as a dire risk.  (Why he embraces modern knowledge in one case and rejects it in the other is baffling).This, combined with his past condemnation of the vulture capitalism and new Gilded Age agenda of the Republican Party, is viewed as heresy by the false Christians so prevalent in today's GOP.  Andrew Sullivan has a good recap of the GOP hysteria with Francis' upcoming encyclical on climate change.   Here are some excerpts:

For the far right, the recent Synod on the Family was bad enough, with its gestures of decency towards gay Catholics. But the impending encyclical on climate change seems to have sparked a new level of mania. At First Things, Maureen Mullarkey calls the Pope “an ideologue and a meddlesome egoist”. Robbie George notes that Francis “has no special knowledge, insight, or teaching authority pertaining to matters of empirical fact of the sort investigated by, for example, physicists and biologists,” and that his views on climate change “could be wrong”. And Steve Moore, writing in Forbes, claims that the Pope has adopted “the language of the radical green movement that is at its core anti-Christian, anti-people, and anti-progress”.

I find this all preposterous. We have just discovered that last year was the hottest on record, eclipsing 2010. Whole eco-systems are being wiped out; our oceans may be heading toward the point of no return; and the rape – rather than conservation – of our natural habitat is not even faintly defensible in Catholic or Christian terms.

The problem is simply that Francis has broken from too many elements in the Republican Party platform.

First there were affirming statements about homosexuality. Then harsh words for capitalism and trickle-down economics. And now climate change. That, it seems, is a bridge too far. Francis has put conservative American Catholics in the position of having to choose between the pope and the GOP.
In the hands of the theocons, the Republican platform became more than a parochially American mishmash of positions thrown haphazardly together for contingent historical reasons. Rather, it was a unified statement of High Moral Truth rooted in Thomas Aquinas’ medieval theology of natural law — the most highly developed outgrowth of Christian civilization.

And one that, in many respects, simply falls apart through the prism of modern science. The theocons created an abstract fusion of GOP policy and an unrecognizable form of Christianity that saw money as a virtue, the earth as disposable, and the poor as invisible.
As in so many areas, it’s the American far right whose bluff is finally being called.