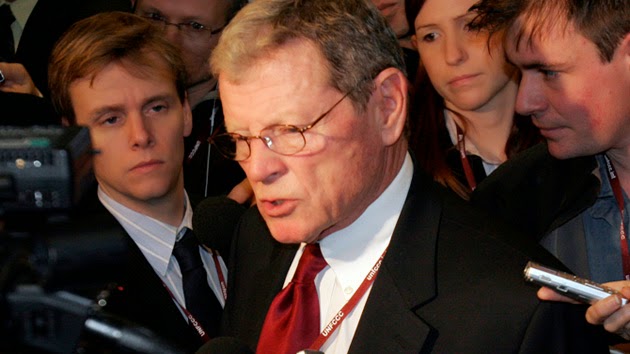 We had plenty of warning that batshit craziness would ensue once Sen. James Inhofe (R-OK) became the chairman of the Senate Environment Committee and Inhofe has wasted no time in demonstrating that he's lost touch with objective reality.   Inhofe took to the Senate floor for a long speech about how he believes human-caused climate change is fake. Never mind that the consensus of scientists (other than those funded by the oil industry) is nearly unanimous.  Think Progress looks at Inhofe's lunacy.  Here are highlights:

Wednesday was a big day for Sen. James Inhofe (R-OK). In the morning, he officially took the gavel as chairman of the Senate’s Environment Committee. In the afternoon, he took the Senate floor for a long speech about how human-caused climate change is fake.

[T]he speech has everything. References to the oft-debunked “ClimateGate” stolen e-mail “scandal”, a poster of a Time Magazine cover from 1974 claiming an ice age is coming, and multiple references to former Vice President Al Gore. It has a mention of a survey of weather-casters who think global warming is caused by natural variation, but does not mention that weather-casters are not climate scientists. It even includes the claim that the U.N. Intergovernmental Panel on Climate Change “started” the whole idea that climate change is happening . . .

Inhofe says he has compiled a list of 4,000 “renowned scientists” scientists who disagree (“this is all in my website,” he said). Inhofe’s list actually has 650 people, some of whom are television meteorologists, geologists, anthropologists, and even a man with no college degree.

Conversely, one of the most recent peer-reviewed studies on the state of climate science showed that out of 4000 abstracts from peer-reviewed papers published in the past 21 years that stated a position on the cause of global warming — 97 percent of these endorsed the point that it was human-caused. In the video, Inhofe says this is “just not true.”

Don’t expect this speech to be the end of climate denial in the Senate. Indeed, Inhofe ended his speech by promising more of it, citing his new position as head of the Senate Environment and Public Works Committee.

The Republican Party that I grew up in is truly dead and gone.  Insanity, racism, bigotry and the embrace of ignorance are now the GOP norm.  As for Inhofe, he belongs in a mental institution.