The Ugly Legacy Of King Abdullah 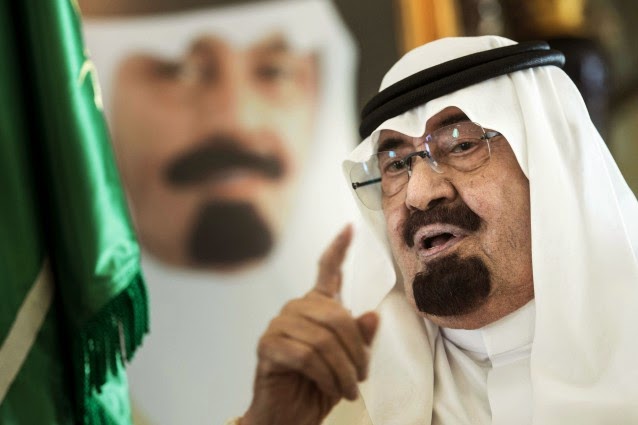 Diplomats and world leaders are falling all over themselves to say nice things about King Abdullah of Saudi Arabia who died earlier in the week.  The level of self-prostitution on the part of these individuals is enough to make one vomit.  The reality is that but for Saudi Arabia's vast oil reserves Abdullah would likely instead have been condemned for human rights abuses and fostering dangerous religious extremism.  The man put wealth and personal power over all else and presided over a government that regularly violates international human rights treaties, denies religious freedom and freedom of the press and upholds treating women as the chattel property of their husbands or male relatives.  John Kerry's statement that "King Abdullah was a man of wisdom & vision" shows that Kerry's head is so far up his ass that it's a wonder he hasn't suffocated.  The sad take away is that if one controls enough oil, one can do whatever one wants and engage in all kinds of abuses and savagery.  Equally sad is America's willingness to throw its principles out the window for the sake of oil.  Think Progress looks at Abdullah's track record on women's rights.  Here are some highlights:

One of the most scrutinized aspects of the Saudi Arabia’s rights’ record is its so-called “male guardianship system,” women are not allowed to travel, obtain a passport, marry, or continue their education without the approval of a male relative.

The King’s own daughters are hardly an exception to the harsh rule. Four of his daughters claim that the are being forcibly held in a dilapidated palace with little in the way of food and water. “Our father said that we had no way out,” Sahar Al Saud, 42, wrote in an email to the British broadcast network Channel 4, “And that after his death our brothers will continue detaining us.”

“We are just an example of so many families, of what so many women, go through. Just a tiny, tiny example,” the princess who once enjoyed international skiing and shopping trips said.

It’s not only Saudi Arabian women who face heavy-handed sentences for defying the country’s strict laws around social order.

Less than 10 percent of Saudis are able to vote.

According to a report by the human rights organization Amnesty International, more than 2,000 people were executed in Saudi Arabia between 1985 and 2013. The organization claims that many of those who have been tortured or killed were advocates for social and political reform in the country who were charged with vague offenses like “disobeying the ruler.”

Not exactly the handiwork of a "reformer."  Andrew Sullivan has a summary of other reactions that show the falsity of the statements lauding Abdullah who was in fact a tyrant.  Here are excerpts:

Greenwald is disgusted by the tributes to the late Saudi king:


The effusive praise being heaped on the brutal Saudi despot by western media and political figures has been nothing short of nauseating; the UK Government, which arouses itself on a daily basis by issuing self-consciously eloquent lectures to the world about democracy, actually ordered flags flown all day at half-mast to honor this repulsive monarch.


It’s not often that the unelected leader of a country which publicly flogs dissidents and beheads people for sorcery wins such glowing praise from American officials. Even more perplexing, perhaps, have been the fawning obituaries in the mainstream press which have faithfully echoed this characterization of Abdullah as a benign and well-intentioned man of peace.


Saudi’s influence on the outside world is almost wholly malign. The young men it sent to fight in Afghanistan turned into al-Qaida. The Sunni jihadis whom Saudis have funded in Iraq and Syria turned into Isis. It has spread a poisonous form of Islam throughout Europe with its subsidies, and corrupted western politicians and businessmen with its culture of bribery. The Saudis have always appealed to the worst forms of western imperialism: their contempt for other Muslims is as great as any American nationalist’s.

My thoughts on Abdullah? Good riddance.  Sadly, his replacement will likely be no better.
Posted by Michael-in-Norfolk at Saturday, January 24, 2015

Some people believe that about the dead one should say nothing but good.

Let me honor this man with the same encomium I used for Ronald Reagan, Robert Bork, and various other worthies.