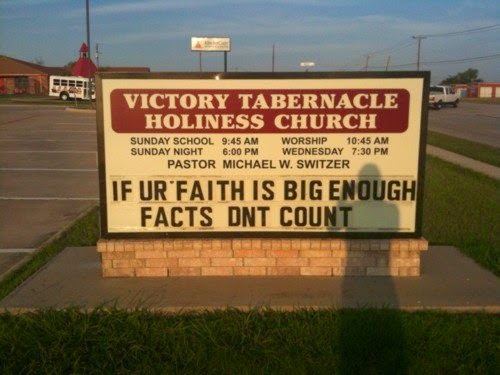 Once upon a time conservatives respected education, science, and knowledge and did not daily deny objective reality if it collided with mythical religious belief.   Those were the types on conservatives I grew up with in the Republican of yesteryear.   Now, to be a Republican means joyously embracing ignorance, rejecting science, and sticking one's head in the sand in the face of measurable evidence.  What caused the change?  From my perspective, the rise of the Christofascists in the GOP.  Anything and anyone that doesn't conform to their fantasy world religious beliefs must be rejected and attacked no matter how negative the consequences.  A piece in the New York Times looks at the phenomenon.  Here are excerpts:

Evidence doesn’t matter for the “debate” over climate policy, where I put scare quotes around “debate” because, given the obvious irrelevance of logic and evidence, it’s not really a debate in any normal sense. And this situation is by no means unique. Indeed, at this point it’s hard to think of a major policy dispute where facts actually do matter; it’s unshakable dogma, across the board. And the real question is why.


Before I get into that, let me remind you of some other news that won’t matter.  First, consider the Kansas experiment. Back in 2012 Sam Brownback, the state’s right-wing governor, went all in on supply-side economics: He drastically cut taxes, assuring everyone that the resulting boom would make up for the initial loss in revenues. Unfortunately for his constituents, his experiment has been a resounding failure. The economy of Kansas, far from booming, has lagged the economies of neighboring states, and Kansas is now in fiscal crisis.

So will we see conservatives scaling back their claims about the magical efficacy of tax cuts as a form of economic stimulus? Of course not. If evidence mattered, supply-side economics would have faded into obscurity decades ago. Instead, it has only strengthened its grip on the Republican Party.


[W]e have evidence that the number of Americans experiencing financial distress due to medical expenses is also dropping fast.  All this is utterly at odds with dire predictions that reform would lead to declining coverage and soaring costs. So will we see any of the people claiming that Obamacare is doomed to utter failure revising their position? You know the answer.

And the list goes on. On issues that range from monetary policy to the control of infectious disease, a big chunk of America’s body politic holds views that are completely at odds with, and completely unmovable by, actual experience. And no matter the issue, it’s the same chunk.
The question, as I said at the beginning, is why. Why the dogmatism? Why the rage? And why do these issues go together, with the set of people insisting that climate change is a hoax pretty much the same as the set of people insisting that any attempt at providing universal health insurance must lead to disaster and tyranny?

Well, it strikes me that the immovable position in each of these cases is bound up with rejecting any role for government that serves the public interest.

And why this hatred of government in the public interest? Well, the political scientist Corey Robin argues that most self-proclaimed conservatives are actually reactionaries. That is, they’re defenders of traditional hierarchy — the kind of hierarchy that is threatened by any expansion of government, even (or perhaps especially) when that expansion makes the lives of ordinary citizens better and more secure.

[W]e’re living in a political era in which facts don’t matter. This doesn’t mean that those of us who care about evidence should stop seeking it out. But we should be realistic in our expectations, and not expect even the most decisive evidence to make much difference.