Virtually every legitimate mental health and medical association in America condemns the use of "ex-gay" a/k/a "reparative therapy," especially for minors, yet in Virginia it is still perfectly legal to inflict the dangerous, witch doctor like therapy on minors.  The same Republican legislators who want to control every nuance and aspect of a woman's womb could care less about the harm being done to LGBT minors.  Particularly because opposing such therapy would bring down the wrath of The Family Foundation, Virginia's largest hate group, and its dominatrix like president, Victoria Cobb.  As the Washington Blade reports, State Sen. Louise Lucas (D-Portsmouth) and Del. Patrick Hope (D-Arlington County) have each introduced bills that would ban “conversion therapy” to minors in Virginia.It goes without saying that the always foul Victoria Cobb is acting as if someone took a major dump in her Cheerios. Here are article highlights:

Mathew Shurka was 16 when his father encouraged him to undergo so-called “conversion therapy.”

“I don’t have erectile dysfunction,” said Shurka. “I was not interested in women. I knew what my desire was.”

Shurka spoke in support of a bill that state Del. Patrick Hope (D-Arlington County) introduced last month that would ban “conversion therapy” to minors in the commonwealth.

“There is no on-off switch to sexual orientation,” Hope said during the press conference that took place inside the General Assembly Building in downtown Richmond. “This bill is based on science.”

A bill seeking to ban “conversion therapy” to minors that Hope introduced last year died in the Virginia House of Delegates.

“Virginia children and families have a right to expect that a therapist practicing under a license from the state will not put them at risk of severe harm; including depression, substance abuse and suicide,” said Prentiss.

Cobb's opposition, of course, is based on fairy tales authored by Bronze Age goat herders and a belief that children are the chattel property of their parents no matter who insane and abusive such parents may be.   Sadly, I suspect Virginia Republicans will again kill the legislation as they prostitute themselves to Cobb and her foul hate group in a manner that would make the most tawdry of whores blush.

For the record, I was never subjected to "conversion therapy" but I did try for 37 years to apply some of the supposed "cures" and to pray away the gay.  All id did was eventually bring me to the point of suicide.  It needs to be banned nationwide.  It is nothing less than child abuse. 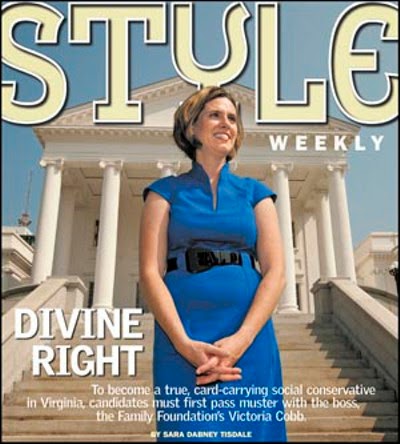