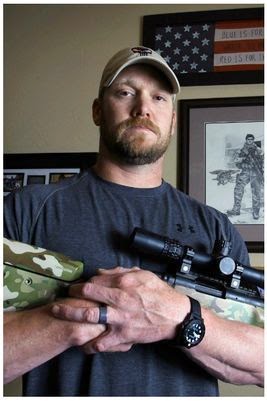 American Sniper is one movie that I have no plans to see given that in many ways one would think that it had been commissioned by the Bush/Cheney regime to rewrite history to justify the Iraq War and the horrors for which both Bush and Cheney should be facing war crimes prosecution.  For those who are of an "America right or wrong" mindset, I'm sure that these truth deniers will love the film.  For those who value accurate history and an honest look at America's mistakes in the hope we can avoid repeating them, the movie is nothing short of dangerous propaganda.  A picture of the real Chris Kyle is above. A piece in Salon looks at the lies the movie is promoting:

The film American Sniper, based on the story of the late Navy Seal Chris Kyle, is a box office hit, setting records for an R-rated film released in January. Yet the film, the autobiography of the same name, and the reputation of Chris Kyle are all built on a set of half-truths, myths and outright lies that Hollywood didn’t see fit to clear up.


Here are seven lies about Chris Kyle and the story that director Clint Eastwood is telling:

1. The Film Suggests the Iraq War Was In Response To 9/11: One way to get audiences to unambiguously support Kyle’s actions in the film is to believe he’s there to avenge the 9/11 terrorist attacks. The movie cuts from Kyle watching footage of the attacks to him serving in Iraq, implying there is some link between the two.

2. The Film Invents a Terrorist Sniper Who Works For Multiple Opposing Factions: Kyle’s primary antagonist in the film is a sniper named Mustafa. Mustafa is mentioned in a single paragraph in Kyle’s book, but the movie blows him up into an ever-present figure and Syrian Olympic medal winner who fights for both Sunni insurgents in Fallujah and the Shia Madhi army.

3. The Film Portrays Chris Kyle as Tormented By His Actions: Multiple scenes in the movie portray Kyle as haunted by his service. One of the film’s earliest reviews praised it for showing the “emotional torment of so many military men and women.” But that torment is completely absent from the book the film is based on. In the book, Kyle refers to everyone he fought as “savage, despicable” evil. He writes, “I only wish I had killed more.” He also writes, “I loved what I did. I still do. If circumstances were different – if my family didn’t need me – I’d be back in a heartbeat. I’m not lying or exaggerating to say it was fun.

4. The Real Chris Kyle Made Up A Story About Killing Dozens of People In Post-Katrina New Orleans: Kyle claimed that he killed 30 people in the chaos of New Orleans after Hurricane Katrina, a story Louisiana writer Jarvis DeBerry calls “preposterous.”  It shows the sort of mentality post-war Kyle had, but the claim doesn’t appear in the film.

5. The Real Chris Kyle Fabricated A Story About Killing Two Men Who Tried To Carjack Him In Texas: Kyle told numerous people a story about killing two alleged carjackers in Texas. Reporters tried repeatedly to verify this claim, but no evidence of it exists.

6. Chris Kyle Was Successfully Sued For Lying About the Former Governor of Minnesota:Kyle alleged that former Minnesota Governor Jesse Ventura defamed Navy SEALs and got into a fight with him at a local bar. Ventura successfully sued Kyle for the passage in his book, and a jury awarded him $1.845 million.

7. Chris Kyle’s Family Claimed He Donated His Book Proceeds To Veterans’ Charity, But He Kept Most Of The Profits: The National Review debunks the claim that all proceeds of his book went to veterans’ charities. Around 2 percent – $52,000 – went to the charities while the Kyles pocketed $3 million.

Although the movie is an initial box office hit, there is a growing backlash against its simplistic portrayal of the war and misleading take on Kyle’s character. This backlash has reportedly spread among members of the Academy of Motion Picture of Arts and Sciences, which could threaten the film’s shot at racking up Oscars.

I'm sure Dick Cheney will love the movie if he hasn't already seen it.  That alone speaks volumes about how disturbing this movie is and the lies it perpetuates.
Posted by Michael-in-Norfolk at Friday, January 23, 2015

Thank you for this post. I was almost going to see this tomorrow night. Now I'll see "The Imitation Game", as skewed as it is, I do admire Alan Turing!

We saw the Imitation Game and loved it.