Publisher Pulls Best-Seller About Made Up Journey to Heaven 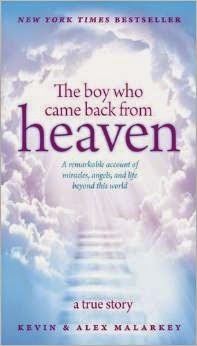 The pious seemingly will fall for all kinds of snake oil.  A case in point?   "The Boy Who Came Back from Heaven: A Remarkable Account of Miracles, Angels, and Life Beyond This World"which was pulled by Tyndale House, a leading Christian publisher, after its subject, Alex Malarkey acknowledged in an open letter that he was lying about his supposed experience.  It turns out, the entire storyline was made up by Malarkey who "wanted attention" and seems to have been trying to please others, including Alex's father who co-authored the book.  Sadly, this is not the first book that has publicized supposed visit to Heaven and back.  The sheeple are all too willing to be fleeced it would seem.  CBS News has coverage.  Here are highlights:

A best-selling account of a 6-year-old boy's journey to heaven and back has been pulled after the boy retracted his story.

Spokesman Todd Starowitz of Tyndale House, a leading Christian publisher, confirmed Friday that Alex Malarkey's "The Boy Who Came Back from Heaven: A Remarkable Account of Miracles, Angels, and Life Beyond This World" was being withdrawn. Earlier this week, Malarkey acknowledged in an open letter that he was lying, saying that he had been seeking attention. He also regretted that "people had profited from lies."

"The Boy Who Came Back From Heaven" was first published in 2010 and told of a 2004 auto accident which left Malarkey in a coma. According to the book, co-written by Alex's father, Kevin Malarkey, he had visions of angels and of meeting Jesus. In 2014, Tyndale reissued "The Boy," which on the cover includes the billing "A True Story."

The facts of "The Boy Who Came Back From Heaven" have long been disputed in the Christian community, which has challenged reports of divine visions in Malarkey's book and other best-sellers such as Todd Burpo's "Heaven is for Real." Last June, the Southern Baptist Convention passed a resolution declaring "the sufficiency of biblical revelation over subjective experiential explanations to guide one's understanding of the truth about heaven and hell." One of the leading critics has been Malarkey's mother, Beth.  In April 2014, she wrote a blog posting saying that the book's success had been "both puzzling and painful to watch" and that she believed Alex had been exploited.

"I could talk about how much it has hurt my son tremendously and even make financial statements public that would prove that he has not received moneys from the book nor have a majority of his needs been funded by it," she wrote.

The same type of fairy tales unfortunately are peddled from pulpits around the world every Sunday.  Some day one can only hope that more people will wake up to the reality that religion is focused on money and controlling others.  If there is a higher being, he/she/it is not what is being marketed by those motivated by greed and a desire to exploit others.
Posted by Michael-in-Norfolk at Monday, January 19, 2015