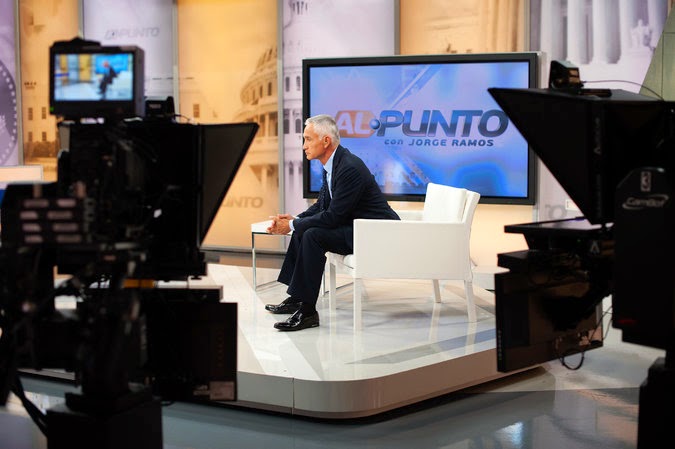 While the would be GOP presidential candidates continue to see who can most thoroughly prostitute them self to the Christofascist/Tea Party base of the GOP, Jorge Ramos, the Univision and Fusion television anchor who is often called the Walter Cronkite of Latino America, is calling out the GOP on its anti-immigrant - read racist - agenda.  With the number of Latino voters growing even as the angry aging conservative Christian whites that the GOP depends upon dies off, the GOP's anti-immigrant, pro-white supremacist position is nothing more than a form of slow suicide.  It goes without saying that the GOP does not like Ramos' speaking the truth about the GOP being no friend to Latino voters.  Here are highlights from a New York Times piece:

Mr. Priebus, who stared out from multiple screens in a control room here looking as if he would rather have been doing anything but talking to Mr. Ramos, insisted it was not so. But Mr. Ramos would not have it.

“The message,” he retorted, “is anti-immigrant.”

For years, Mr. Ramos largely aimed his ire at President Obama for breaking his 2008 campaign promise — made directly to Mr. Ramos — that he would propose an overhaul of the nation’s immigration system in his first year in office, and for deporting two million people since. Even after Mr. Obama announced late last year that nearly half of the estimated 11 million undocumented immigrants could apply to work without fear of deportation, Mr. Ramos confronted him during a Nashville forum for having “destroyed many families” by not acting sooner.

But Mr. Ramos’s focus has changed, he said in an interview here: “Now is the turn of Republicans.”

This weekend, the Spanish-language Univision, and Fusion, its English-language venture with ABC News, will cover the first gathering of 2016 Republican presidential aspirants, at a conservative forum in Des Moines on Saturday organized by Representative Steve King of Iowa. Mr. King, an immigration hard-liner, is well known to Latinos for remarks like one claiming that most young border-crossers have “calves the size of cantaloupes because they’re hauling 75 pounds of marijuana.”

Given Republicans’ immigration stance, Mr. Ramos expects to cover more such stories through 2016.  And that has some Republicans worried.

“Remember what L.B.J. said, ‘When you lose Walter Cronkite, you’ve lost the war’?” said Matthew Dowd, a campaign adviser to George W. Bush, recalling the oft-cited if disputed story that President Lyndon B. Johnson said he lost “middle America” when Cronkite turned against the Vietnam War. Among Latino voters, Mr. Ramos has the sort of influence and audience that Cronkite had more broadly among Americans in his day.

[I]n 2016, the Republican record will matter. Mitt Romney, the 2012 Republican presidential nominee, who said during the campaign that undocumented residents should “self-deport” — a position he defended in an interview last November on Univision — got only 27 percent of Latinos’ votes. Republican strategists say their 2016 nominee must get more than 40 percent to win.


“But immigration is personal,” he [Ramos] said. “Immigration is the issue that tells us who is with us and who is against us; there’s no question about it. And it’s very simple to understand why — half of all Latinos over 18 years of age were born outside the United States. It really makes no sense to attack them and criticize them if you want their vote.”

The issue is also personal for Mr. Ramos, 56, who has the smooth, silver-haired look of a classic television anchor. Born in Mexico City, he came to the United States as a young journalist, and by 28 he was an anchor for Univision. In 2008, he became an American citizen. Univision is a media goliath, but with the 2013 debut of Fusion in English, Mr. Ramos’s reach expanded significantly, and with it the attention of American politicians.

[W]en Republicans, days after his interview with Mr. Priebus, released their roster of televised debates for presidential candidates, Univision and Fusion were not among the chosen media hosts.

Mr. Ramos responded with what has become his mantra. “The new rule in American politics is that no one can make it to the White House without the Hispanic vote,” he said. “So we still expect all candidates from both parties to talk to us.”

I suspect the King sponsored gathering will provide Ramos will all kinds of anti-Republican ammunition.  The batshitery at the even will likely be over the top.  One can only hope the GOP will reap what it has sown in 2016.
Posted by Michael-in-Norfolk at Saturday, January 24, 2015