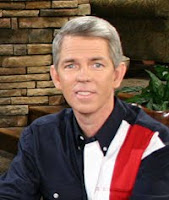 Speaking of liars, the New York Times did a piece the other day on David Barton (pictured at left), a Christian dominionist who writes fictional versions of the history of the United States to support the efforts of Christianist to dupe the masses and impose a Christianist theocracy in place of the nation's current constitutional government. Barton displays utter contempt for real history and would be a laughable figure but for the fact that fools and demagogues of the far right - including many in today's round up of Republican candidates - either quote Barton or rely on him as if he were a legitimate historian. Truth be told, Barton has about as much legitimacy as a historian as Sarah Palin has as a serious intellectual. Chris Rodda, a Senior Research Director, Military Religious Freedom Foundation and author of 'Liars For Jesus' (a free PDF version of the book is available here) is beside herself that anyone takes Barton as anything more than a serious whack job and has a post venting on Huffington Post. The whole situation underscores America's vulnerability to demagogues due to the fact that so many Americans know nothing of real history - a subject relegated time and time again to a low status in our public schools. First, here are highlights from the Times story:
*
Mr. Barton is a self-taught historian who is described by several conservative presidential aspirants as a valued adviser and a source of historical and biblical justification for their policies. He is so popular that evangelical pastors travel across states to hear his rapid-fire presentations on how the United States was founded as a Christian nation and is on the road to ruin, thanks to secularists and the Supreme Court, or on the lost political power of the clergy.
*
Many historians call his research flawed, but Mr. Barton’s influence appears to be greater than ever. Liberal organizations are raising the alarm over what they say are Mr. Barton’s dangerous distortions, including his claim that the nation’s founders never intended a high wall between church and state.
*
“I’ve met with several of the potential candidates this time, always at their call,” Mr. Barton said of the Republican presidential hopefuls. They usually seek specific advice, he said: whom to hire or contact in a particular state, how best to phrase a sensitive point. . . . Among the possible Republican presidential candidates who seek his advice are Mike Huckabee, Newt Gingrich and Representative Michele Bachmann.
*
[M]any professional historians dismiss Mr. Barton, whose academic degree is in Christian education from Oral Roberts University, as a biased amateur who cherry-picks quotes from history and the Bible. “The problem with David Barton is that there’s a lot of truth in what he says,” said Derek H. Davis, director of church-state studies at Baylor University, a Baptist institution in Waco, Tex. “But the end product is a lot of distortions, half-truths and twisted history.”
*
Groups like Americans United for Separation of Church and State have long challenged Mr. Barton’s conclusions. Now, his critics are ratcheting up their alarms. The liberal group People For the American Way recently devoted a report to Mr. Barton, warning about his “growing visibility and influence with members of Congress and other Republican Party officials.”
*
Chris Rodda isn't as kind as the Times and calls out Barton for what he is: a liar. I would add, a deliberate liar. Barton and those like him pose a clear and present danger to the U.S. Constitution and freedom of religion as envisioned by the Founding Fathers. Here's a part of her take on Barton from Huffington Post:
*
After nine years of battling Barton's lies, the first three or four of which were spent writing my book, Liars For Jesus: The Religious Right's Alternate Version of American History, I'm at a point of utter frustration as I watch this Christian nationalist liar get more and more influential. Jon Stewart's interview was the tipping point. If Jon couldn't nail this shameless and obvious history revisionist to the wall, I don't know who can.
*
A lie can be told in a few words. Debunking that lie can take pages. That is why my book (which is only the first volume of what will be a three volume series) is five hundred pages long. Nobody is going to be able to adequately prove to any audience that Barton's lies are lies in an interview like Jon Stewart did last night, and David Barton is never going to agree to debate anyone that he knows can defeat him.
*
If you haven't seen it already, please watch the Daily Show interview, particularly the online extended interview. Then download my book and read it, or watch the videos on my website. I'll be outside on this beautiful spring day playing with my dog, knowing that I've now done everything I possibly can to fight the scourge of David Barton.
*
Barton is indeed a prime example of professional Christians being synonymous with the term pathological liars. As for the sheeple who believe such bullshit, Bob Felton has a good description at Civil Commotion:
*
Barton won’t be influenced, of course, and neither will the morons who want to believe his lies. After years of watching these clowns up close, I’m convinced that there is an intellectual dysfunction at work, not quite a bona fide mental illness but something very close. They need their fictions, the way an addict needs his crack; they cannot face the world without them.
Posted by Michael-in-Norfolk at Friday, May 06, 2011