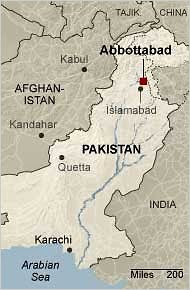 I missed the news last night having gone to bed early, but the media this morning is filled with coverage of the report announced by Barack Obama last evening that American military and C.I.A. operatives had confronted Osama Bin Laden in a stronghold in Pakistan and that the terrorist leader had been killed in a resulting fire fight. Bin Laden's death in no wise end's the menace of Al Qaeda, but psychologically it cannot but undermine the air of invincibility that sometimes seemed to cling to the terrorist network. The irony, of course, is that Bin Laden was located and died under Obama's watch rather than that of the war loving Chimperator Bush who had been unable to pull of the feat. Some of the far right loonies in the USA must be feeling that someone peed in their Cheerios because of this fact (Wing Nut Daily is still hyperventilating about Obama's birth certificate). Bin Laden should remain a symbol of the danger of hatred driven by religious extremism whether the religion be Islam or Christianity and U.S. politicians of all stripes ought to heed the lesson both at home and abroad. Here are highlights from the New York Times:
*
Osama bin Laden, the mastermind of the most devastating attack on American soil in modern times and the most hunted man in the world, was killed in a firefight with United States forces in Pakistan, President Obama announced on Sunday night.
*
In a dramatic late-night appearance in the East Room of the White House, Mr. Obama declared that “justice has been done” as he disclosed that American military and C.I.A. operatives had finally cornered Bin Laden, the Al Qaeda leader who had eluded them for nearly a decade. American officials said Bin Laden resisted and was shot in the head. He was later buried at sea.
*
Bin Laden’s demise is a defining moment in the American-led fight against terrorism, a symbolic stroke affirming the relentlessness of the pursuit of those who attacked New York and Washington on Sept. 11, 2001. What remains to be seen, however, is whether it galvanizes Bin Laden’s followers by turning him into a martyr or serves as a turning of the page in the war in Afghanistan and gives further impetus to Mr. Obama to bring American troops home.
*
How much his death will affect Al Qaeda itself remains unclear. For years, as they failed to find him, American leaders have said that he was more symbolically important than operationally significant because he was on the run and hindered in any meaningful leadership role. And yet, he remained the most potent face of terrorism around the world and some of those who played down his role in recent years nonetheless celebrated his death.
*
Given Bin Laden’s status among radicals, the American government braced for possible retaliation. A senior Pentagon official said late Sunday that military bases in the United States and around the world were ordered to a higher state of readiness. The State Department issued a worldwide travel warning, urging Americans in volatile areas “to limit their travel outside of their homes and hotels and avoid mass gatherings and demonstrations.”
*
After a firefight, they killed Osama bin Laden and took custody of his body.” Muslim tradition requires burial within 24 hours, but by doing it at sea, American authorities presumably were trying to avoid creating a shrine for his followers.
*
Al Qaeda sympathizers reacted with disbelief, anger and in some cases talk of retribution. On a Web site considered an outlet for Al Qaeda messages, forum administrators deleted posts by users announcing Bin Laden’s death and demanded that members wait until the news was confirmed by Al Qaeda sources, according to the SITE Intelligence Group, an organization that monitors radicals.
*
In the United States, the Council on American-Islamic Relations, an advocacy organization, said it welcomed Bin Laden’s death. “As we have stated repeatedly since the 9/11 terror attacks, Bin Laden never represented Muslims or Islam,” the group said in a statement. “In fact, in addition to the killing of thousands of Americans, he and Al Qaeda caused the deaths of countless Muslims worldwide.”
*
The president was careful to add that, as Mr. Bush did during his presidency, the United States is not at war with Islam. “Bin Laden was not a Muslim leader; he was a mass murderer of Muslims,” Mr. Obama said. “Indeed, Al Qaeda has slaughtered scores of Muslims in many countries, including our own. So his demise should be welcomed by all who believe in peace and human dignity.”
Posted by Michael-in-Norfolk at Monday, May 02, 2011