Did the GOP Get the Wake Up Call? 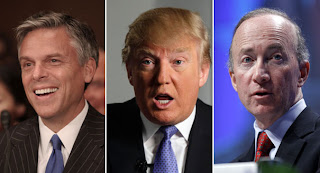 I realize that I often look at what has become of the Republican Party and conservatism in this country over the last 15 to 20 years when what was once a somewhat respectable political affiliation transformed from something respectable into something that almost requires Klan membership, an embrace of a religious theocracy or down right insanity and ignorance. Politico has a piece that ponders whether Obama's leadership in taking out Osama Bin Laden has caused anyone in the GOP to realize that it's time for grown ups to retake control of the GOP and exile the loons and Christofascists to the political wilderness if Republicans hope to have any chance in retaking the White House in 2012. Personally, I believe it will prove very difficult at this late date to rein in the fringe elements that some in the GOP leadership all too willingly embraced - as evidenced by John McCain's pick of the loon from Wasilla, a/k/a Sarah Palin, as his running mate in 2008. Giving in to short term expediency can be a bitch longer term and given the extremism of the GOP base it may proven difficult to nominate someone who is not toxic to the wider electorate. Here are some story highlights (NOTE: Ironically, the story quotes Virginia governor Bob McDonnell - who I have known for 17 years - who by his hatchet job on PBS via line item veto has confirmed that he is part of the fringe and NOT a serious contender for a VP slot) :
*
Donald Trump and birtherism won’t disappear. There will still be talk about the creeping threat of Sharia law. But the dramatic killing of terrorist leader Osama bin Laden by American commandos will immediately reorder a Republican presidential contest that until now had been colored by provocative voices and marginal issues.
*
The arc of the last week illustrated what so many Republicans fear may prevent them from re-capturing the White House next year. In the span of 100 hours, the spectacle of a national discussion over President Barack Obama’s long-form birth certificate — sparked by the pronouncements of a real estate developer who doubles as a reality show celebrity — gave way to a moment of utmost seriousness, defined by the president’s somber delivery of history-making news.
*
The hope among establishment Republicans is that the succession of events will trigger an end to what they see as the silly season — that party activists will sober up and end their flirtation with the fringe.
*
With the first primary debate Thursday and looming decisions on whether to run by Indiana Gov. Mitch Daniels and former Ambassador Jon Huntsman, the moment appears to be a natural pivot point for mainstream Republicans to re-capture control of the primary.
*
[A]lready, the bin Laden news is prompting top Republicans to be more public about their desire to re-focus the nascent primary. . . . party strategists urged mainline candidates like Huntsman, Daniels, former Massachusetts Gov. Mitt Romney and former Minnesota Gov. Tim Pawlenty to use the next few days to subtly begin to make the case that Sunday’s events demand only White House hopefuls plausibly seen as commander-in-chief material.
*
“This election is about three things: jobs, houses and cars,” Kaufman added. “My job, my house and putting gas in my car.” In the meantime, though, GOP officials hope that the bin Laden’s death would hasten the conclusion of the sometimes unseemly presidential preliminaries.
Posted by Michael-in-Norfolk at Tuesday, May 03, 2011