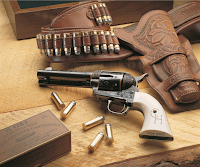 In a move much like that of media whore Ken "Kookinelli" Cuccinelli - Virginia's clinically insane (in my opinion) attorney general - the National Rifle Association ("NRA") has announced that it is dumping the law firm King & Spaulding because of that firm's decision to withdraw from defending DOMA. Never mind that the NRA doesn't even have an official position on DOMA. With the economy, the budget deficit, and international developments serving as the principal focus of most people, the NRA must have been feeling really irrelevant. True, the Kool-Aid drinkers who make up the backbone of the NRA's membership remain loyal, but for most folks - especially those who don't believe one needs to be able to purchase automatic military style weapons - thoughts of the NRA haven't crossed their minds in many months if at all. Enter Kookinelli and his attention grabbing stunt to keep the attention of the untethered and the NRA apparently decided to follow suit. Here are these highlights from BLT Blog (the blog of the Legal Times):
*
The National Rifle Association today is dropping King & Spalding as an outside counsel in the wake of the firm's decision last month to withdraw from representing House Republicans in support of the Defense of Marriage Act. The NRA's action follows a similar decision last week by Virginia Attorney General Ken Cuccinelli to end the commonwealth's relationship with the firm.
*
Former solicitor general Paul Clement, who resigned from the firm over its decision, represented the NRA in last year's Supreme Court case McDonald v. Chicago, which incorporated or applied the individual Second Amendment right to bear arms to state and local regulation. Following that successful representation, according to NRA spokesman Andrew Arulanandam, the NRA engaged Clement and the firm in reviewing briefs and evaluating other potential litigation.
*
In a letter dated today to King & Spalding chairman Robert Hays, NRA general counsel David Lehman said the firm's decision was "indefensible" but emphasized that the NRA's action in dropping King & Spalding is "not motivated by any position on the statute itself."
Posted by Michael-in-Norfolk at Monday, May 02, 2011