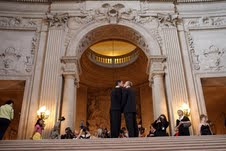 The litigation in Perry v. Schwarzenegger seems to go on and on with constant new twists and turns. Today, the New York Times printed a main page editorial that eviscerated the Proposition 8 supporters who have resorted to seeking to have Judge Vaughn Walker's ruling set aside because he is gay. Meanwhile, California Attorney General Kamala Harris has filed a brief with the California Supreme Court arguing that the Prop 8 proponents lack standing to appeal Judge Walker's district court ruling. I concur with both the Times editorial and AG Harris' legal analysis. First, these highlights from the New York Times editorial:
*
Given ample chance during a 13-day trial to offer an argument apart from prejudice, proponents of Proposition 8, the prohibition against same-sex marriage in California, found no evidence. Now they are trying to disqualify Vaughn Walker, the now-retired Federal District Court judge who ruled that the measure was unconstitutional.
*
After the trial, Judge Walker said he is gay and involved in a long-term relationship. Last week, Proposition 8’s lawyers argued that the ruling should be tossed out because he had had a duty to recuse himself, or at least disclose the relationship at the start of the case. The claim is bogus.
*
It is well established that personal characteristics, like race, sex, ethnicity, religion or sexual orientation, do not by themselves invoke the rule that judges must step aside if their “impartiality might reasonably be questioned.”
*
There is no basis to think Judge Walker’s personal relationship played a role in his ruling on the evidence and on whether a constitutional reason exists to limit anyone’s freedom to marry. The idea that a seasoned, Republican-appointed jurist was unfit to hear the case, and that his decision should be set aside on flimsy ethics grounds, is preposterous.
*
The editorial gets to the heart of the matter. The Prop 8 supporters offered no evidence to support their position other than anti-gay animus and religious based discrimination, neither of which provide justification for discriminatory civil laws. Now, that the case is on appeal, the Christo-fascists have another problem: the issue of their standing to appeal the case when the State of California has refused to do so. As discussed before, past U. S. Supreme Court decisions indicate that they do not. The Ninth Circuit put the issue to the California Supreme Court as an issue of state law and now the state's Attorney General has filed a brief against a finding of standing. Here are highlights from the Washington Post:
*
California’s attorney general has again come out against the state’s same-sex marriage ban, this time telling the state Supreme Court the proponents of successful ballot initiatives do not have the right to defend their measures in court.
*
Kamala Harris, a Democrat who succeeded Gov. Jerry Brown in January as attorney general, submitted an amicus brief Monday in the ongoing legal dispute over the voter-approved ban known as Proposition 8.
*
In it, she argued that only public officials exercising the executive power of government have authority to represent the state when laws passed by voters or the Legislature are challenged.
*
“California law affords an initiative’s proponents no right to defend the validity of a successful initiative measure based only on their role in launching an initiative process,” Harris wrote.
*
Proposition 8’s sponsors asked the 9th U.S. Circuit Court of Appeals to allow them to step in, but the court punted the question to the California Supreme Court earlier this year, saying it was a matter of state law. If the sponsors are not permitted to intervene, the lower court ruling overturning Proposition 8 will stand.
*
Harris contended in her brief that rather than empowering citizens, granting the sponsors of initiatives the ability to overrule the governor and attorney general’s judgment “would rob the electors of power by taking the executive power from elected officials and placing it instead in the hands of a few highly motivated but politically unaccountable individuals.”
Posted by Michael-in-Norfolk at Wednesday, May 04, 2011