Removing the Fog of War 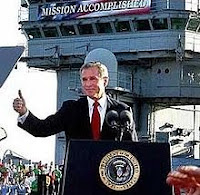 My prior post commented on the need to clearly recognize the disaster and high crimes of the Bush/Cheney years. Timothy Egan has a column in today's New York Times that makes a similar case and I maintain that until Americans open their eyes to the real history of those benighted years, the nation stands likely to repeat the same errors and to fall for the same lies and jingoism again. As the saying goes, those who do not know history are doomed to repeat it. If the The Chimperator and the "America right or wrong" crowd really cared about the nation, they would not be constantly trying to sweep the nasty truth under the rug. Let's face it, the ENTIRE Iraq War was built on lies and sadly the mainstream media was to lazy to ever ask the hard questions required or do real investigative journalism. The result has been billions of dollars squandered and countless lives needlessly lost. Here are highlights from Egan's column:
*
Birthed in a big lie about weapons of mass destruction, the war in Iraq was in desperate need of a hero in 2003 when Jessica Lynch wrecked her Humvee and was knocked unconscious in enemy territory. Nine days later, the 19-year-old Army clerk was rescued by American soldiers from an Iraqi hospital.
*
That much was true. From there — in newspaper articles, countless talk-radio fabrications and a book — Lynch was transformed from a nameless casualty to “the little girl Rambo from the hills of West Virginia who went down fighting,” as she said in later testimony.
*
Give her credit: for her service, and for her fierce honesty in the face of myth-making, official and for-profit. It’s more than the defense brass did in her case, or that of the other poster boy for military mendacity, the Army Ranger Pat Tillman. He was killed by his own troops in Afghanistan — a truth the Pentagon thought we couldn’t handle, so they spun a tale of heroism in the face of hostile fire.
*
But before closing the book, we do need something more detailed than the contradictions of the last few days [of revelry over the death of Bin Laden].
*
Why? Because, almost from the beginning, the trillion-plus-dollar “war on terror” has been abused by fabulists. What followed a horrific crime against innocents in New York and elsewhere started with the correct impulse: get the killer. Then, of course, the killer got out of our sights in Tora Bora and President Bush steered the nation into a disastrous and bankrupting war against a country that had nothing to do with the mass homicide on American soil.
*
The Lynch and Tillman episodes were emblematic of the whole phony campaign at the top. If the White House was willing to go to war on false pretenses, why shouldn’t low-level commanders follow suit on the ground?
*
“They used me to symbolize all this stuff,” said Private Lynch, in one of many admirable attempts to set the record straight. “It’s wrong.” She never fired her weapon. “I’m not about to take credit for something I never did,” she said. “I’m just a survivor.”
*
The coverup of this awful fratricide appeared to involve the highest levels of the Army while Tillman’s parents were looking for answers. “This lie was to cover their image,” said the soldier’s mother, Mary Tillman, in her congressional testimony. “They blew up their poster boy.”
*
With the Bin Laden raid, the apologists for torture are trying to institutionalize a story that he never could have been found and killed without the United States taking leave of its professed values in war. This, despite the fact that military officials have said repeatedly that the best information came from detainees who were not tortured.
*
The private in the Humvee, Jessica Lynch, said it better than any man with a row of stars on his lapel. “The truth of war is not always easy to hear,” she told members of Congress, “but it is always more heroic than the hype.”
Posted by Michael-in-Norfolk at Friday, May 06, 2011