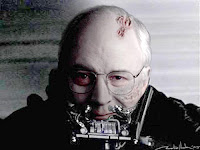 Former Chimperator Bush is apparently feeling peevish that his administration "hasn't been given enough credit" for his contributions to the war on terror. Hence, his childish refusal to join President Obama in New York City yesterday. Bush and his sycophants continue to try to re-write the history of misrule and high crimes during the eight years of the Bush/Cheney nightmare. It is so very important that we not forget what was done to ruin the honor of this nation - and that doesn't even touch upon the economic catastrophe that flowed from Republican deregulation efforts during that same time period. Andrew Sullivan has a dead on assessment of just what the Chimperator and Emperor Palpatine Cheney brought to the USA - with the help, of their Republican enablers in Congress. Here's Andrew's summation of the Bush/Cheney years:
*
Not only do these war criminals and shoddy lawyers [John Yoo] refuse to take accountability for their crimes, they tell clear untruths about how the capture of bin Laden was achieved and distort history.
*
So let us be very clear. The war criminal Dick Cheney presided over the worst lapse in national security since Pearl Harbor, resulting in the deaths of more than 3,000 people. This rank incompetent failed to get bin Laden at Tora Bora, and then dragged the US on false pretenses into a war in Iraq, empowering Iran's dictatorship, and killing another 5,000 more Americans on a wild goose chase. He presided over the deaths of more than 8,000 Americans, and tens of thousands of Iraqis during his criminally incompetent years in office.
*
What on earth are we debating? How have these delusional maniacs managed to even get us onto this turf? Because they have to. Because when the full truth of these past years are fully in focus, they will be revealed as some of the greatest criminals ever to have wielded power in America.
Posted by Michael-in-Norfolk at Friday, May 06, 2011