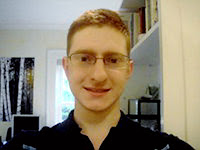 I often don't like plea deals - it depends on the circumstances, of course - because the guilty often get away with far less that what they truly deserve even in instances of very serious crimes. In the the Tyler Clementi case, however, if Molly Wei indeed fully cooperates in helping prosecutors nail Clementi's roommate, then the plea deal may be justified. Moreover, while Wei may have been a co-conspirator, it was still Dharun Rhavi who set up the secret video camera and no doubt laughed it up at Clementi's tragic expense. Frankly, I hope prosecutors make an example of Rhavi so that others will perhaps think twice before doing something to cruel to another human being. By all accounts, Tyler Clementi was an amazing talent and it is indeed a crime that he took his own life because a vicious action of his roommate. Here are highlights from Reuters:
*
Part of the deal requires Molly Wei, 19, of West Windsor to testify against Dharun Rhavi, the roommate of Tyler Clementi who leaped off the George Washington Bridge last fall after learning he had been spied upon. Clementi, 18, was a Rutgers freshman and promising violinist.
*
Wei pleaded not guilty in Middlesex County Superior Court on Friday to watching the webcast with Ravi and a judge accepted her application into a pretrial intervention program that could drop the two counts of invasion of privacy against her. In exchange for dismissing the charges, Wei must testify against Ravi, complete 300 hours of community service, undergo counseling on cyberbullying and take classes on dealing with people of alternative lifestyles.
*
Clementi's family accepted her deal in a statement that noted "Wei's actions, although unlawful, were substantially different in their nature" from Ravi's. "Actions have consequences," the Clementi family said in the statement. "We wish Ms. Wei will become a person who will make better decisions, will help people and show kindness to those she comes in contact with."
*
Hate crime charges against Ravi were handed down last month by a grand jury that issued a 15-count indictment which also charged invasion of privacy and evidence tampering.
*
Prosecutors accused Ravi, 19, of Plainsboro, New Jersey of setting up the filming of Clementi's encounter with another man, and advertising the live video stream on Twitter. He was accused of staging a cover-up by deleting the Twitter post and replacing it with another one intended to mislead investigators as well as asking witnesses not to testify against him.
Posted by Michael-in-Norfolk at Saturday, May 07, 2011