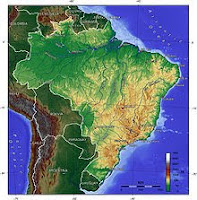 Yet again what was once part of what egocentric Americans considered to be part of the so-called developing world has rocketed ahead of the USA in terms of equality for all citizens and true separation of the civil laws from religious based discrimination. Today, Brazil's Supreme Court ruled that that nation must also civil unions for same sex couples. It was a 10-0 vote, with one abstention despite the heavy lobbying of the Roman Catholic Church. Meanwhile, the USA continues to allow a narrow - and hate based - version of Christianity to trump the plain meaning of the U.S. Constitution which was drafted by those who wanted to involvement of organized religion in the civil laws and government. I suspect the Founding Fathers would be appalled at what an empty promise the nation they founded now presents in terms of freedom of religion and separation of church and state. Our neighbors to the south, however, get the message that the Christianists seek to thwart. Here are highlights from ABC News:
*
Brazil's Supreme Court ruled Thursday night that civil unions between same-sex couples must be allowed in this nation with more Roman Catholics than any other.
*
In a 10-0 vote, with one abstention, the justices said gay couples deserve the same legal rights as heterosexual pairs when it comes to alimony, retirement benefits of a partner who dies, and inheritances, among other issues. The ruling, however, stopped short of legalizing gay marriage.
*
Brazil's ruling sets a judicial precedent that must be honored by all public institutions, including notary publics where civil unions must be registered.
*
"This is a historic moment for all Brazilians, not just homosexuals. This judgment will change everything for us in society — and for the better," said Marcelo Cerqueira with the gay rights group Grupo Gay da Bahia. "Gays, lesbians and transsexuals will be recognized as being more human. We'll be more accepted by having our rights honored."
*
The request for the Supreme Court to recognize civil unions came two years ago from the Brazilian attorney general's office, largely because legislation that would give same-sex couples the rights enjoyed by married heterosexual couples has been stalled in Congress for more than a decade.
*
Luis Roberto Barroso, a law professor at Rio de Janeiro State University, argued in a friend-of-the-court appearance before the justicies that allowing same-sex civil unions would mean "overcoming historical discrimination."
*
"The implications of a homosexual relationship are the same as those of a heterosexual one. To not recognize that is to say that the affection they (gays) have has less value and can be disrespected," said Barroso.
*
Note how the Brazilian LGBT rights spokesman states that the ruling will make LGBT Brazilians more human under the law. Here in the USA, the whole basis behind laws barring same sex marriage and civil unions is precisely to keep LGBT Americans less equal and by extension, less human. Bravo to Brazil. As I have noted before, I ponder how much longer I want to remain in the USA which has proven to be a total fraud in terms of affording equality and religious freedom to its citizens.
Posted by Michael-in-Norfolk at Thursday, May 05, 2011