What Happens if Assad Falls in Syria? 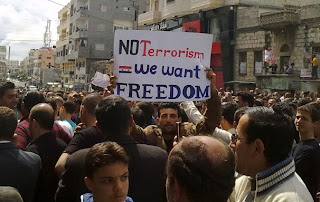 The news continues to be inundated with coverage of the military action that took out Bin Laden. But perhaps even more significant to the shape of politics and foreign affairs is the issue of what happens if Bashar al-Assad's regime follows the pattern of Tunisia and Egypt. Some say that the fall of Assad could trigger a civil war which could spread throughout the Middle East as minority Shiite governments are faced with an uprising of majority Sunni populations. Meanwhile, the violence continues and protesters do not appear willing to allow things to slide back to the old ways. I have long believed that once a population learns that things can be different - the Internet has made this far easier than in past decades - it is hard for dictators to put the genie back in the bottle. The USA definitely finds itself walking a tightrope. Here are highlights from a Washington Post story that looks at Syria and what might unfold:
*
The toppling of the presidents in Tunisia and Egypt precipitated a tumult of revolutionary fervor that promises to transform the Middle East, but the potential collapse of the Syrian regime could wreak havoc of a very different kind.
*
In Syria, the fall of President Bashar al-Assad would unleash a cataclysm of chaos, sectarian strife and extremism that spreads far beyond its borders, threatening not only the entrenched rulers already battling to hold at bay a clamor for democratic change but also the entire balance of power in the volatile region, analysts and experts say.
*
“If the regime collapses you will have civil war and it will spread throughout the region,” engulfing Lebanon, Iraq, Saudi Arabia and beyond, said Hilal Khashan, professor of political science at the American University of Beirut. “A collapse of the Syrian regime is a doomsday scenario for the entire Middle East.”
*
Many believe that is why the international community, including the United States, has offered such a tempered response to the bloodshed in Syria, the latest Arab country to be swept up in the unrest roiling the region. NATO warplanes are bombing Libya to protect civilians there, but there have been no calls even for Assad to step aside, despite an increasingly violent crackdown by the Syrian military in which at least 550 people have died.
*
Part of the problem is that so little is known about what would come next should Assad be ousted. Egypt and Tunisia took great leaps into uncertainty when their regimes fell, but in each case the army, a known quantity, asserted its independence and seized power to oversee the transition.
*
In Syria, the army is so tightly bound to Assad’s Alawite clan that the fall of the regime would almost certainly lead to its disintegration, setting the stage for an Iraq-style implosion in which the state collapses, a majority seeks to exact revenge on a minority and regional powers pile in to assert their own interests, said Joshua Landis of the University of Oklahoma, who writes the blog Syria Comment.
*
“For the Obama administration, the last thing they want, just at the time they’re withdrawing from Iraq, is a destabilized Syria that would lead to open season for jihadis to cross the border into Iraq,” said David Lesch, professor of Middle East history at Trinity University in Texas.
*
Iraq’s own Shiite government also views with alarm the upheaval across the border, mindful that the collapse of Syria’s Shiite minority government would almost certainly herald the rise of a Sunni state on its doorstep, and perhaps renewed support for Sunni insurgents still resisting the Shiite ascendancy in Baghdad.
*
To the north, Turkey is concerned about the potential aspirations of Syria’s Kurds, who could seek to assert their identity and claims to statehood as Iraq’s Kurds did after the fall of Saddam Hussein.
*
And the Persian Gulf states, though long on frosty terms with Damascus, also are nervous about the prospect of sectarian conflict, which could leach into Saudi Arabia and Bahrain. For Saudi Arabia, there is also the worry that the assertion of Sunni power in Syria could inspire restive domestic Sunni radicals to intensify their opposition to the monarchy.
*
Syrian activists bristle at the suggestion that their movement is dominated by Islamists, and say their revolution is no different from the one in Egypt, in which ordinary people spontaneously took to the streets to vent their frustrations with corruption, nepotism and the ruthlessness of the security forces. “I feel disgusted by how the superpowers make these calculations based on their own interests, while my own people are dying on the streets,” said Mohammed Ali Atassi, a prominent journalist and filmmaker currently in Beirut.
*
With its long record of sponsoring multiple, shadowy extremist groups in pursuit of foreign policy goals, the Syrian regime is also in a position to unleash considerable chaos across the region should it feel unduly threatened, analysts say. And that, according to Khashan, the American University of Beirut professor, makes it unlikely the Syrian regime will fall. “Because, to tell the truth, no one wants it to fall, including Israel, the U.S. and the gulf states,” he said.
Posted by Michael-in-Norfolk at Tuesday, May 03, 2011