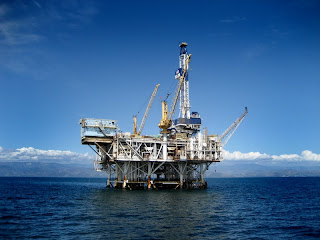 For newer readers, I spent nearly the first decade of my law career in oil and gas matters - first as an attorney with a large firm that represented major oil companies in exploration and production matters and then as in-house counsel for a fortune 50 corporation's oil and gas subsidiary. A subsidiary which in some years cash-flowed the entire corporate conglomerate now known as Allied Signal. In the course of my duties I covered everything from pipeline issues, to gas processing plants to overseas offshore production ventures, including the North Sea. As a result, I DO know a thing or two about exploration costs, how long it takes to get a major production discovery on line, etc. And frankly, I want to vomit when I hear idiot politicians who know NOTHING about the industry parroting the "drill baby drill" mantra or sleaze bags from the American Petroleum Institute whining about Obama welcoming Brazil's major offshore discovery while restricting offshore drilling in the USA. Anyone who claims that offshore drilling is a solution to our current gas prices is a liar. Let me repeat that, they are LIARS. Yes, a few years back Brazil made a major discovery. But it will be likely another DECADE or more before the first barrels of production hit the oil market. And in the interests of full disclosure, the largest investment I inherited from my late mother is a chunk of Exxon stock which she never sold because of capital gains issues having purchase Mobil stock some 40 years ago. The New York Times has an editorial that rightly excoriates those - mostly Republicans, naturally - now returning to the "drill baby drill" mantra. Here are highlights from the Times' editorial:
*
With the country again facing $4-a-gallon gasoline, the time would seem ripe for a grown-up conversation on energy. What we are getting instead is a mindless rerun of the drill-baby-drill operatics of the 2008 campaign, when gas was also at $4 a gallon. Then, as now, opportunistic politicians insisted that vastly expanded oil drilling would bring relief at the pump and reduced dependence on foreign oil. Then, as now, these arguments were bogus.
*
As President Obama observed in a March 30 address on energy issues, drilling alone cannot possibly ensure energy independence in a country that uses one-quarter of the world’s oil while owning only 2 percent of its reserves. Nor can it lower prices, except at the margins. Only coordinated measures — greater auto efficiency, alternative fuels, improved mass transit — can address these issues.
*
Still the oil industry and its political allies persist in their fantasies. On Thursday, the House passed the first of three bills that will require the Interior Department to accelerate drilling permits without proper environmental or engineering reviews, reinstate lease sales off the Virginia coast that were canceled after the BP blowout, and open up protected coastal waters — East, West and in Alaska — to drilling.
*
Here’s the hard truth: Prices are set on the world market by the major producers, OPEC in particular. Even countries that produce more oil than they need, like Canada, have little leverage. Canada’s prices track ours.
*
The Energy Information Agency recently projected what would happen if the nation tripled production on the outer continental shelf. There would be no price impact at all until 2020 and only 3 cents to 5 cents a gallon in 2030.
*
By contrast, the agency found, raising the fuel efficiency of America’s cars would do real good. Increasing the fleetwide average from roughly 30 m.p.g. today to 60 m.p.g. in the next 15 years, an ambitious but not implausible goal, could bring prices down by 20 percent.
*
Some politicians get it. Senator Max Baucus, a Montana Democrat, is drafting a bill that seeks to repeal $4 billion in annual taxpayer subsidies to the oil industry and use the proceeds to develop more efficient cars and alternative fuel sources.
*
Repealing these breaks would reduce the deficit and yield revenues to be invested in cleaner fuels, while having no real impact on prices. Mr. Obama may not be able to persuade the House of these simple truths. But he can and must seize whatever opportunities are offered in the Senate, involving himself, not just rhetorically, in the hard but necessary struggle for a sane energy policy.
Posted by Michael-in-Norfolk at Saturday, May 07, 2011

Exactly! I wrote about this on my blog today as well. Oil is not set nationally, but Internationally, and any increase in production here could be offset by OPEC easily.

It would be better for us to bite the bullet when it comes to higher energy prices and look for other forms of energy.