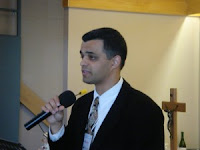 By happen stance I checked out Box Turtle Bulletin this morning and to my horror I saw Timothy Kincaid's piece about LifeSiteNews carry a story largely endorsing the views of Scott Lively, one of the most deranged and hysterically anti-gay bigots on the planet. As Kincaid notes, LifeSiteNews must be read with the understanding that it has a strong sectarian slant and is perhaps best viewed as an unofficial lay voice of the Roman Catholic Church. Its Editor, John-Henry Westen (pictured above right), interviewed Scott Lively and echoed without question his statements about homosexuality in Uganda and the current effort underway to pass legislation to execute HIV positive gay people, incarcerate other gay people for life, and jail those family, friends, or acquaintances who do not report suspected gay people to the government. While Westen’s biases make him ready to believe the worst about gay people, however irrational, it was surprising the extent to which Lively’s word was taken as unvarnished truth. Here is how Kincaid describes Lively (about whom I have written in the past and with whom I had a few nasty e-mail exchanges):
*
Scott Lively is an unusual anti-gay activist. He does not stop at moral concern, cultural discomfort, or objection based in ignorance, stereotype, or unfamiliarity. Rather, Lively travels the world marketing in anti-gay lies and myths and seeking to inflame hatred and instigate outrage and social oppression of gay people on an international scale.
*
Lively is the author of The Pink Swastika, a book whose premise is that the Nazis were primarily a homosexual organization and that gays were responsible for the Holocaust. While this is a laughable assertion dismissed by historians and holocaust groups, it is read, believed, and treasured in countries where animus against gay people is strong and an excuse to hate gay people is welcomed without question.
*
That the Catholic Church is unofficially endorsing the bat shit craziness of Lively is shocking even for the morally bankrupt Church hierarchy. Here's a sampling of the parroting of Lively being put out on LifeSiteNews:
*
While a proposed and much-criticized anti-homosexuality law in Uganda is definitely too harsh, the law comes as a direct response to the heavy-handed pressure from international gay-activist politicians on Uganda to accept homosexuality as normal, according to one Christian expert who was recently in the African country to testify against the current wording of the bill. In fact, as Dr. Scott Lively, the President of Defend the Family pointed out, the preamble to the bill, and the bill itself contain numerous references to stopping international pressure on Uganda to accept Western sexual values that are abhorrent to Ugandan culture.
*
Dr. Lively, a pro-family activist and attorney based in California was in Uganda in March to testify before Ugandan legislators now considering the legislation. In an interview with LifeSiteNews (LSN), Dr. Lively explained that the impetus for the bill was "a lot of external interference from European and American gay activists attempting to do in Uganda what they've done around the world - homosexualize that society." One of their main concerns, explained Lively, "are the many male homosexuals coming in to the country and abusing boys who are on the streets."
*
While the Catholic leadership in the nation has not yet responded publicly to the proposed bill, they have consistently expressed outrage at the attempts of the West to impose acceptance of homosexuality on the country. Last month at the Synod for Africa at the Vatican, bishops from all over the continent noted their grave concerns over the international anti-family pressure.
*
Summing up the discussions, the Cardinal Archbishop of Cape Coast, Ghana, Peter Turkson, said that the Synod had "described in various ways a ferocious onslaught on the family and the related fundamental institution of marriage from outside Africa and attributed it to diverse sources." The bishops, he said, "vigorously denounced the ideology and international programs which are imposed on African countries under false pretexts or as conditions for development assistance."
*
As for Lively's purported expertise, he holds a Doctor of Theology degree from a small Bible college and a law degree from the far right Catholic and non-ABA accredited Trinity Law School in California. Because Trinity Law School is not accredited, its graduates can only be licensed in California and are not eligible to take the bar exam in other states. The Catholic faith has sunk to new lows if Lively is taken as a legitimate "expert." Why not quote a tribal witch doctor as an expert on brain surgery?
Posted by Michael-in-Norfolk at Sunday, November 29, 2009