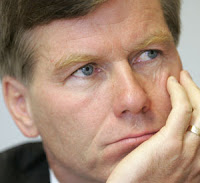 One has to wonder why he has waited until the waning weeks of his term to begin to implement the plan to belatedly extend health care benefits to the same sex partners of Virginia State employees. Up until now, outgoing Governor Tim Kaine has largely thrown LGBT Virginians under the bus other than giving lip service to equality for all Virginians. Nonetheless, the proposal has some fun aspects to it because it will pose an immediate test for Governor elect, Taliban Bob McDonnell (pictured at left) who campaigned as moderate despite his Christianist past. The plan has merit and would obviously make Virginia more competitive in the employment market, but the gay-hating Republican Party of Virginia ("RVP") base will likely go berserk. Obviously, if McDonnell has ambitions for higher office, he will have to be careful not to act in a manner that reveals his whole campaign as a moderate was a lie. If there would be no cost to the state, then McDonnell will be greeted with a land mine as soon as he is sworn in. It will be entertaining to see how this all plats out. Here are some highlights from the Washington Post:
*
RICHMOND -- Virginia Gov. Timothy M. Kaine has directed his staff to begin putting into effect a proposal that would allow same-sex partners to be covered under the state's employee health plan. The incoming governor, Robert F. McDonnell (R), who has sparred with Kaine (D) on gay rights issues, expressed concern Thursday about the potential cost of the proposal but did not criticize what is expected to be a controversial one.
*
"My first question is, what [is] the cost to the state by expanding those policies?" McDonnell said at a news conference at the state Capitol. "I am all for using business -- public and private -- to expand health-care coverage. . . . But what I don't know is, what is the cost that has to be borne by the state government versus the individual new subscriber?"
*
Sara Wilson, director of the Virginia Department of Human Resource Management, said officials hope to offer the expanded benefit at no additional expense to the state because employees would be required to pay the entire cost. She said that state officials have been discussing the proposal for months but that she was not directed until mid-November to begin implementing the change.
*
Wilson said that a change of this magnitude would take about 18 months to implement, well after Kaine completes his four-year term Jan. 16. That would leave McDonnell to decide whether to continue the program. House Majority Leader H. Morgan Griffith (R-Salem) said that Kaine, who serves as chairman of the Democratic National Committee, is a "political animal" and called his timing suspect. "He gets to throw a bone to his base and then create a land mine for the incoming administration," Griffith said. "It may be totally innocent, but to change a policy in the last month of administration calls it into question."
*
Kaine and McDonnell clashed on gay rights in 2006 when McDonnell, then the state attorney general, advised Kaine that he had overstepped his constitutional authority when he outlawed bias against gays in state hiring. Eighteen other states provide benefits to adults other than spouses, and 10 provide benefits to domestic partners with no distinction between couples of the same or opposite sex, Wilson said. In the Washington region, Maryland offers benefits to same-sex partners; the District, to domestic partners.
*
McDonnell claims he's now a moderate and that he does not support discrimination against LGBT Virginians. I guess we will see if he meant any of it.
Posted by Michael-in-Norfolk at Friday, December 04, 2009