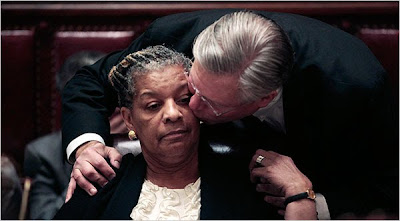 Sadly, religious based discrimination triumphed today in the New York State Senate where marriage equality was defeated by a unanimous vote of the Republican senators and a number of spineless Democrats. These Benedict Arnolds included the following:
*
• Joseph Addabbo (D-Queens) — NO
• Darrel Aubertine (D- Cape Vincent) — NO
• Ruben Diaz (D-Bronx) — NO
• Shirley Huntley (D-Queens) — NO
• Carl Kruger (D-Brooklyn) — NO
• Hiram Monserrate (D-Queens) — NO
• George Onorato (D-Queens) — NO
• William Stachowski (D-Buffalo) — NO
*
Obviously, the LGBT boycott of Democrats candidates needs to be extended to these folks. Better yet, let's hope that they face primary challenges in the next election. The photo above shows Senator Thomas K. Duane, the sponsor of same-sex marriage legislation, embracing Senator Ruth Hassell-Thompson after she announced her support for the bill during the debate on the senate floor on Wednesday in Albany.
*
Not surprisingly, among the gloating are Maggie Gallagher and Brian Brown at NOM and the Roman Catholic Church. Of course, Ms. Maggie and Ms. Brown love it because they are further enriching themselves with each additional state they beg for money to fund their campaign of lies and untruths. Their merchandise is bigotry and discrimination veiled behind religion. I increasingly believe that the most tawdry prostitute has more intrinsic integrity than Ms. Maggie. One can only long for the day when history views her and her allies as the equivalents to George Wallace when he stood blooking the school house door. Here are some highlights from the New York Times on this unfortunate development:
*
The New York State Senate decisively rejected a bill on Wednesday that would have allowed gay couples to wed, providing a major victory for those who oppose same-sex marriage and underscoring the deep and emotional divisions surrounding the issue.
*
The 38-to-24 vote startled proponents of the bill and signaled that political momentum, at least right now, had shifted against same-sex marriage, even in heavily Democratic New York. It followed more than a year of lobbying by gay rights organizations, who poured close to $1 million into New York legislative races to boost support for the measure.
*
The defeat revealed stark divides: All 30 of the Republican senators opposed the bill, as did most of the members from upstate New York and Long Island. Support was heaviest among members from New York City and Westchester County and among the Senate’s 10 black members. Seven of the Senate’s 10 women voted for it.
*
“I’m a woman and a Jew and so I know about discrimination,” said Senator Liz Krueger of Manhattan.
*
The state’s Roman Catholic bishops lobbied for its defeat, however, and after the vote released a statement applauding the move : “Advocates for same-sex marriage have attempted to portray their cause as inevitable,” Richard E. Barnes, the executive director of the New York State Catholic Conference, said in the statement. “However, it has become clear that Americans continue to understand marriage the way it has always been understood, and New York is not different in that regard. This is a victory for the basic building block of our society.”
*
Alan Van Capelle, executive director of the Empire State Pride Agenda, New York’s largest gay rights group, hinted that senators who voted against the bill on Wednesday could face repercussions. “Had there been no vote today, we would not know who would stand by our community in a fight, and who would walk away. We wouldn’t know what work needed to be done in 2010.
Posted by Michael-in-Norfolk at Wednesday, December 02, 2009