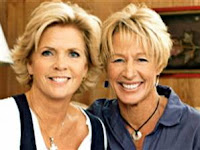 Some have reacted with a shrug to the coming out of Meredith Baxter at age 62. She hasn't been in the Hollywood lime light for years, but she is still well known to many and overall, I congratulate her on taking this action. The reality is that the more that we all come out, the more the lies and stereotypes are destroyed. Some have asked me how she could possibly not have known she was gay as she went through three marriages and had five children. My response is that one can go to great lengths to deny what they do not want to accept. I did it for decades and might well have stayed closeted but for a totally unplanned encounter a decade ago - you might say that "I kissed a boy and I liked it." And that unplanned encounter and the way it "felt right" for the first time made me have to face what I had never wanted to accept because of my religious background and upbringing in a conservative area. Younger readers may not recall that homosexuality was classified as a mental illness until 1973 (my third year of college) and the ever gay-hating Catholic Church was of course preaching that gays were going to go straight to Hell. I suspect that Meredith Baxter, especially being older than me, went through some similar type of denial for years as I did. Here are some highlights from MSNBC:
*
For seven years, actress Meredith Baxter has been hiding a secret. Now Baxter, who played the devoted hippie mom constantly butting heads with her conservative kids on “Family Ties,” is making a public admission.
*
“I am a lesbian and it was a later-in-life recognition,” she told Matt Lauer on TODAY. “Some people would say, well, you’re living a lie and, you know, the truth is — not at all. This has only been for the past seven years.” Baxter, 62, though anxious, decided to come out on national television after her sexuality became tabloid fodder. “I’ve always lived a very private life,” said the actress, who’s never even had a publicist. “To come out and disclose stuff is very antithetical to who I am.”
*
The National Enquirer reported that Baxter was spotted last month aboard a Caribbean cruise sponsored by lesbian travel company Sweet, writing that she was seen “traveling with a female friend, and she seemed very relaxed and comfortable.”
*
Baxter says that her relationship with men was complicated, and it took her decades to understand why. . . . “I got involved with someone I never expected to get involved with, and it was that kind of awakening,” she said. “I never fought it because it was like, oh, I understand why I had the issues I had early in life. I had a great deal of difficulty connecting with men in relationships.”
*
Both Baxter’s former on-screen family and her real family have known about her sexuality, though she was initially nervous about telling her five children. “I said, ‘I think I’m gay,’ and my oldest boy said, ‘I knew,’ ” Baxter laughed. “The support from my family and anyone close to me has been so immediate and unqualified. I’ve really been blessed.”
*
Now that she is coming out, she also sees herself as an advocate for gay rights. “This is a political act, even though that’s not what it feels like to me,” she said. “If anyone knows someone who’s gay or lesbian … they’re less likely to vote against them to take away their rights. I can be that lesbian you know now …”
Posted by Michael-in-Norfolk at Wednesday, December 02, 2009