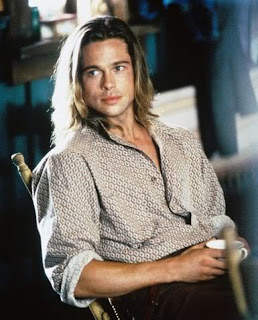 I will concede that I've been a Brad Pitt fan for years - at least since he played Louis in An Interview With the Vampire or starred in Legends of the Fall (see the photo at right). But he has proven that he is much more than a pretty face and beautiful body. He has spoken out for LGBT equality and marriage equality and, given what he is doing in New Orleans, he puts his money where his mouth is unlike so many self-centered others. The New York Times has a story on Pitt's home building endeavor in New Orleans' Ninth Ward which was devastated by Hurricane Katrina. (My former partner and I put up 7 evacuees from that part of New Orleans back in 2005, so I heard first hand accounts from those who lost everything - see this prior post). Would that there were more celebrities like Pitt. Here are some story highlights:
*
In 2007, frustrated by the slow pace of rebuilding in the Lower Ninth, Brad Pitt set up a foundation called Make It Right; the foundation then commissioned 13 architecture firms to design affordable, green houses. The organization plans to build 150 homes, all for returning Lower Ninth residents. So far, just 15 of them are occupied, but those 15 make a big impression.
*
Indeed, from the main route into the Lower Ninth, the Claiborne Avenue Bridge, it’s impossible to miss the Brad Pitt Houses, as everyone here calls them. They are sprawling, angular buildings in bold hues not usually seen outside a gelateria. Monuments to the city’s resilience, and to Hollywood’s big heart, they are also New Orleans’s newest tourist attraction.
*
But “Brad Pitt’s neighborhood” is a beehive of activity, with builders and landscapers vastly outnumbering residents. A sign in front of each of the houses gives the name and city of its architect. One, called the Float House, was designed by the Pritzker Prize-winner Thom Mayne of Los Angeles. The main part of the house is built to rise with surging flood waters, on pylons that keep it from coming loose. It’s difficult to see the innovative foundation, but unusual external features are easy to spot, such as a kind of trellis cut into intricate patterns and painted turquoise, set against the raspberry-hued building.
*
[L]ike other architects I spoke to, he expressed admiration for Mr. Pitt. “He deserves a great deal of credit,” Mr. Dart said, adding that Mr. Pitt had “done more for New Orleans” than any government agency.
*
Ms. Leggett-Barnes, whose house was designed by the Philadelphia firm KieranTimberlake, is — literally — the poster child for Make It Right; her image, plastered on bus-shelter signs around the city, urges former residents to return to the neighborhood. “There may be people who want to move back,” she said, “but don’t know that it’s possible.”
*
Brad, I salute your efforts and desire to help others. Would that we had more people in society and government office that had a sense of giving back to others.
Posted by Michael-in-Norfolk at Monday, November 30, 2009

MRGO lawsuit consultation is available to those individuals and entities whose property was located in the following Louisiana zip codes: 70129, 70117, 70092, 70085, 70075, 70043, and 70032. To be eligible to file a MRGO lawsuit, claimants must have filed SF Form 95 claims with the Army Corps of Engineers on or before Aug. 29, 2007. If you meet this criteria, and have not already retained an attorney, our MRGO flooding lawyers want to hear from you today. Please visit this site for more information: http://www.yourlawyer.com/topics/overview/MRGO-Flood-Lawsuit