Hate Speech Has Consequences - Especially When Combined with Guns 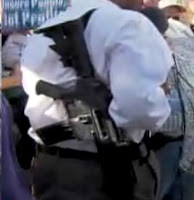 A few days ago I wrote about nutcase Arizona Pastor Steve Anderson - yep the same guy who advocates the execution of gays and wants Obama dead - and now it turns out that one of the gun carrying fruit loops that appeared at a townhall meeting on health care reform attends Pastor Anderson's Kool-Aid cafe parish. People and the MSM in particular try to laugh off these loons, but I see them as a clear and present danger. Do we really need those who hold lunatic beliefs and have a persecution complex walking around with assault weapons? I think not and it is only a question of time before some religiously motivated far right individual goes over the edge and things get violent. Personally, I do not believe anyone needs to own an assault weapon and this guy is a case in point. Here are some highlights from Crooks & Liars:
*
So it turns out that Contessa Brewer had good reason to see a connection between the rabidly hateful rhetoric spewed by the likes of Pastor Steven Anderson and the angry, gun-toting protesters turning out for presidential events: One of the most prominent of these, an African-American man named "Chris", is in fact a member of Pastor Anderson's congregation. "Chris" was on Alex Jones' "Prison Planet" radio show late last week and discussed how "my pastor was beaten up" at a Border Patrol checkpoint.
*
Yes, that pastor is indeed Steven Anderson, who was arrested in April by the Border Patrol for being uncooperative at a patrol checkpoint. Anderson attempted to make himself something of a national martyr to the conspiracists out there by posting a video to YouTube about it that quickly went viral.
*
The funny thing about these gun-toting protesters is that they like to portray themselves as being simple, honest defenders of their gun rights when they show up for public events, especially those featuring the president, packing heat publicly. They adamantly deny that they're bringing their guns to intimidate their fellow citizens from speaking out with a contrary view. But this is beyond disingenuous; it doesn't take a genius to figure out that the vast majority of the people who attend a public debate will perceive someone with a gun as someone they should fear -- particularly if they have an opposing view.
*
Moreover, these gun-toters want to assure us they pose no threat whatsoever to either the president or his supporters by bringing these guns. They're just ordinary citizens standing up for their rights, right? The Secret Service need have no fear about their motives. But then we find out that at least one of them ardently admires a pastor who preaches how much he hates Obama and wishes him dead, in order "to save this country." And we're supposed to tell these "innocent" gun nuts from the people who might actually aim their weapons at the president how?
*
Yes, America has always had a lunatic fringe, but these folks honestly frighten me. I believe some of them are ticking time bombs waiting to go off. I believe we need some serious gun control legislation that takes assault weapons out of the hands of potential crazies. Here's a reminder of Pastor Anderson's and his flock's message of "love:"
*
Posted by Michael-in-Norfolk at Thursday, August 27, 2009